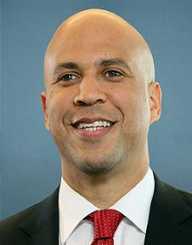 Cory Booker is an American civil rights activist, politician. He is the first African American Senator of New Jersey currently serving in the office.

Cory Booker, real name Cory Anthony Booker was born in the US capital Washington DC on April 27, 1969. He was raised in New Jersey. Booker grew up in a well off family. His parents Cary and Carolyn Booker worked in the senior management of the electronic giant manufacturer IBM.

He went to Northern Valley Regional High School situated in Old Tappan. He joined Stanford University upon leaving high school. Booker graduated in 1991 with a degree in Arts majoring in Political Science. He got his Master degree in Sociology in 1992. He was an athletically gifted student. Booker played in the college American football team. He doubled up as the head of the student counseling center at the college.

While at Stanford, he got a scholarship courtesy of Rhodes Foundation to study at the prestigious Oxford University in England. He commenced his studies after his second degree at Stanford University. In 1994 he graduated with a degree in American history. In 1997 Booker graduated from the Yale University with a doctorate degree in Law. He practiced free legal assistance for the underserved in the New Haven community. He also joined and was an active member of the National Black Law Students Association.

He got a job at the New York Urban Justice Center. Booker resigned to join the Newark Youth Project in New Jersey as the Program Coordinator. In 1998 he rallied the residents of the Newark Brick towers area to demand better housing and security facilities.

Booker won the 1998 elections to the city’s legislative council. He beat the favorite and four times elected incumbent in a win that surprised many. As a council legislator, he lived and interacted with the people on the streets run by criminal gangs and drug barons. Booker made several enemies within the ranks of the council who opposed his down to earth approach to the housing and security issues. The council members in return voted out nearly all the progressive legislative bills he sponsored in the assembly. Frustrated, Booker unsuccessfully ran for mayoral office in 2002.

Out of the council, he started the Newark Now. Booker used his charitable civic organization to create awareness on the rights of the masses on housing and other social amenities. He returned to elective politics in 2006. He ran for mayor of Newark on a Democrat ticket against the incumbent Sharpe James. James pulled out of the race endorsing his deputy to replace him in the race. Booker won the elections with a convincing majority of over 72% of the votes cast. He also went into office with a majority of the council having elected Democrat legislatures. Booker had control of the legislative machinery of the council to institute the reforms he needed.

As Mayor, Booker stopped the council from selling off much of the city’s land to private landowners. He also increased police presence, improving security. He survived a planned attempt against his life by the street gang mafia.

Booker successfully ran for the US Senatorial seat in New Jersey in August 2013. In the by-election, Booker garnered 59% of the vote. He became the first African American to represent New Jersey in the US Senate.

As the New Jersey Senator, Booker has fought for the rights of same-sex marriages and low wage income earners. He is an advocate of mutual bipartisan approach on emotive issues between the Republicans and Democrats.

He supports the regulation of housing to improve the lives of the inner city families. On gun control, Booker supports the tightening of legislation to help fight gun-related murders.

In February 2019 Booker announced that he will be vying for the Democratic ticket to run against incumbent US President Donald Trump. Like before, he is campaigning on a unifying factor of bipartisan approach on issues. He has already gotten endorsements from high ranking Democrats.

Booker is unmarried. He lives in Lincoln Park, in New Jersey. Booker is bilingual, speaking both English and Spanish fluently. He is a strict vegetarian.

On sexual orientations, he moved from hating gays in his youth, to supporting same-sex marriages in his adulthood. He is a worshipper at the Metropolitan Baptist church in New Jersey.

He became the first Afro American Senator for New Jersey. Booker went into Senate as the only black member after Barrack Obama.

Despite his wealthy upbringing, Booker has identified with the needs of the unprivileged within the society.