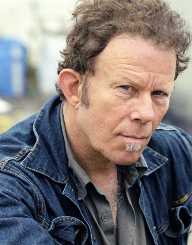 Thomas Alan Waits is an American singer as well as an actor that is very famous for his songs in music genres. He is good in jazz and vaudeville. He is blessed with a distinctive and intoxicating music. He is good and well respected in the field of music. Tom Waits is very talented and good in composing music and writing songs. He never adheres to the tradition of music as he tries everything to experiment in different music style. He, in fact, took acting roles and loved unconventional ballad performance. His music received mixed reviews in the United States as a result of his unique nature. He managed to earn a devoted cult following all over the world. He has never imitated any other musician.

Tom Waits was born on the 7th day of December 1949. He was born to Alma McMurray, and Frank Waits in the California region of the United States of America. He learned about piano at his neighbors and traveled to Mexico with his father. His exposure to Mexican music rekindled his love for music. He started playing in local bands at his high school, Hilltop High School. He was unimpressed by the musical scene although he had wanted to be a musician. He chose to do something different from the traditions.

His work at the Heritage Nightclub in San Diego paved the way for his musical career. Tom Waits got the chance of playing there for the pay of $6. He later moved to Los Angeles in 1971 and debuted with Closing Time In 1973. This music was regarded as being folk influenced and filled with an electric mix of songs which were reviewed positively by a lot of critics. In 1976. Tom Waits toured over and became alcoholic. He, however, released an album Small Change which was regarded as being filled with gloomy and pessimistic mood. In 1980, he released his newer album Heartattack and Vine and this reached number 30 in Australian 30. By this time, he has begun gaining fame all over the world.

In the same here, Tom Waits started his movie career and appeared in Francis Coppola’s movies: The Outsiders, Rumble Fish and The Cotton Club. In 1986, he created a musical play Franks Wild Years which was premiered later in the year. He played the lead role and was quite successful with the film. He later also collaborated with the famous film director, Robert Wilson as well as William Burrough to help in his avant-garde musical The Black Rider in 1990. As of 1993, he had brought out his album The Black Rider.

Three years later, Tom Waits released another album Mule Variations and toured extensively after the release of the album. He also released some songs which were based on the Theatrical collaborations with Robert on two albums – Alice and Blood Money. He was always referred to like the musician’s musician and have had various artists to perform on his cover versions of his songs. His recent album received a Grammy Award nomination. It is one of the most successful alba.

Tom Waits is known to have won a lot of awards. Some of the awards won by him are listed below:

Tom Waits got married to a screenwriter, Kathleen Brennan in August 1980. The couple is proud parents of three children. Her wife was known to be his biggest collaborator as well as a supporter. The couple is very close and always ready to help each other. For several years of the marriage, they are together in peace and harmony. Most of the time, Tom Waits always regard himself as a very lucky man.