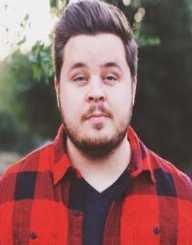 Bryan Lanning an American YouTube star singer and videographer was born on 20 January 1990 in California, United States. He is the second born son in a family of two having an older sister Bev Lanning. His musical career was evident from a tender age as he grew up in a somewhat financially unstable family. He was subjected to a hard life and lacked parental care and support since he was brought up by his grandmother. However, despite these challenges, Bryan Lanning was able to attend school and graduated with a Bachelor’s degree from the Boise State University.

Bryan Lanning had graduated to become a videographer but had a passion for music which led him to take music lessons. He was enthusiastic about his newly found career and began doing music videos which he uploaded on the internet especially YouTube and Facebook. His videos caught the attention of people and soon started having followers on these social media platforms which elevated him to another level of his singing career.

Bryan Lanning met Missy and moved in together. Missy was also an artist who had launched a vlog known as ‘Daily Bumps’ alongside her sweetheart Bryan Lanning. Bryan was slowly rising to fame especially when they began the vlog in which he posts his music videos. The videos feature Bryan and his wife Missy singing together so passionately and with much experience. They also upload videos and pictures which are humorous that has been helpful to many families especially those that are still young. The vlog proved to be a significant sell-out gaining a good number of views of up to 1 billion. Combining both his videographer and singing skills, Bryan helped promote and market his video channel.

Bryan Lanning released several singles which he also uploaded on his internet sites including ‘Who Knew’ and ‘This is Home.’ The two music videos were his first released in 2015 which was followed by ‘Like a Lion’ in 2016. Bryan became so successful when these posts were released to the public, and his fame had spread all over the globe. Apart from being a videographer and singer, Bryan also ventured into business becoming one of the most successful entrepreneurs. Having a variety of products to sell including mobile phone covers and T-Shirts boosted his income and popularity.

Bryan Lanning is one of the few artists who maintain and advocates for being original yet creative. He is one artist who believes in different yet straightforward productions which is evident in his songs and videos. His videos are simple and recorded in a way that does not contain too many graphical effects or choreography. Bryan Lanning has never disappointed his fans when it comes to producing music. He loves his fans and takes their reviews into considerations some of which he has implemented and has helped him achieve much in his career.

Bryan is also a loving husband to Missy, and together the two have included their children in their videos which make him outstanding. Although Bryan married Missy while still young, he has proved to be faithful to her and has avoided many wrangles.

Bryan Lanning never knew his father since his mother became pregnant out of wedlock something which led to a challenging childhood. Most of his childhood moments were spent in San Diego where he lived with his grandmother together with big sister Bev Lanning. Despite being raised in a poverty-stricken family, Bryan was a determined child who saw his way into attaining an education up to the university level.

Bryan Lanning met Missy with whom they had a childhood memory together and the two lovebirds’ wedded. However, their marriage life was not smooth since they had to put up with financial instability for a long time before their breakthrough. The couple’s attempt to have a child was almost being vanquished in disappointment for almost two years of trial. In 2013, they welcomed their first born baby followed by their second child in 2015. Bryan Lanning is a charitable and benevolent person who alongside his wife supports many charities including ‘Anchor Cambodia Fund’ and ‘Ailing Horse Ranches’ in the USA.