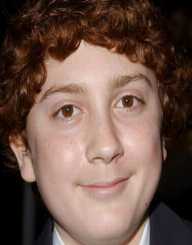 Daryl Sabara is an actor, famous for his role in Spy Kids movie series.

Daryl Christopher Sabara was born on 14 June 1992, the older fraternal twin to brother Evan. The twins were born in Torrance, California to mother Sandra Krebs. Daryl is a Russian Jewish of German descent. He started ballet at the age of three.

When Daryl Sabara was a child, Daryl was performing with South Bay Ballet, a regional ballet company before venturing into acting. During the 90s, he appeared as supporting roles on Murphy Brown, Rosewell, and Will and Grace. His break for fame was when he was chosen to play Juni Cortez in Spy Kids in 2001. Daryl was the baby in Murphy Brown.

Spy Kids was a successful franchise,  with four movies made, it propelled Daryl into stardom. In 2003, he appeared in an episode in Friends, as the adopted kid. Daryl also did voice acting, providing the voice for Hunter in Father of the Pride, Rex in Generator Rex, and Hero Boy in The Polar Express.

Daryl has a recurring role in Wizards of Waverly Place, a popular Disney Channel Sitcom. He plays T.J. Taylor, a troublemaking wizard.

Daryl Sabara also worked with his brother Evan in The Batman, where he voiced Scorn, while Evan voiced Robin. He appeared alongside Robert De Niro in Machete, a 2010 action film. Daryl also co-starred in John Carter in 2012.

In 2015, Daryl Sabara was in The Green Inferno, where he played a college student who was taken prisoner by a jungle tribe. He co-produced a short film: Girl Woman in 2016, and he picked up a few more voice acting roles in Ben10 and Ultimate Spider-Man.

In total, Daryl Sabara is credited in twenty- five film roles, either as a performing actor or voice actor. He also has been credited in forty- two television series roles and four video game voice performance.

Daryl Sabara won 2005 Young artist awards for Polar Express, and 2010 Streamy Awards for his role in Easy to Assemble.

Daryl Sabara and brother Evan are Jewish; they underwent bar mitzvah at Chabad of Brentwood in 2005.