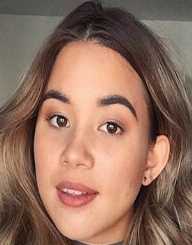 Born on July 29, 1994, Eva Gutowski is one of the famous Youtubers who is rocking the world of social media with her huge followers. She is renowned for her beauty and fashion tutorials videos aimed towards the youth. Before his popularity as a vlogger, she took up several jobs including serving as a cashier in a mum and pop pizza shop and with an aspiration to become TV personality or a psychiatric but later shifted to becoming a reporter and a host.

Her intense presence on social media has now overshadowed all the aspirations and Eva Gutowski is doing fantastically well. She currently has almost 7.9 million subscribers to her MyLifeAsEvachannel on Youtube and also has her personal Youtube Red show, Me and My Grandma. She is included in the Social Media Stars list in Billboard and has been ranked fourth on the Variety Magazine’s Famechangers Digital Star Ranking list. Eva has also gone into writing and has since published My life as Eva: The Struggle is Real.

Eva Gutowski was born on July 29, 1994, in Brea, California in the United States of America. After her high school education, she enrolled at the California State University at Fullerton where she majored in Broadcast Journalism.

One may have thought that Eva Gutowski after pursuing a course in journalism would toe that line to become a reporter as she wished. However, it seems to have an interest in social media is shifting that focus. Eva rolled onto social media with the creation of her Youtube channel MyLifeAsEva in 2012. The channel is used mainly for her beauty and fashion tips. With nearly 7.9 million subscribers and 216 video post, Eva has become a social media goddess in her own right.

Eva Gutowski has popular videos like The Fast and Affordable Halloween Costumes, How I Style and Cute and Warm Fall Outfits among several others. She gives vivid insight in whichever video she decides to do according to her perspectives. With her fashion tips, Eva displays how she prepares for seasons and occasions regarding her dressing and the type of accessories to match with and goes ahead with some recommendations. She also does collaborative videos with other fashion vloggers and also collaborates on other channels including AwesomenessTV, ‘Seventeen,’ ‘MayBaby,’ ‘Makeupbymandy24’ and ‘Teen Vogue.

Eva Gutowski was involved in the 2015 Girls Night In tour in which she toured 20 cities in the United States with fellow YouTube fashion and lifestyle personalities including Andie Case, Mia Stammer, Alisha Marie, Sierra Furtado, and Meredith Foster. Eva features in the YouTube Red series Me and Grandma which was launched in 2017 with a rate of $10 per month. Aside from YouTube, she has a strong presence on Instagram with 5.5 million followers and 3.3 million subscribers on Twitter.

Eva Gutowski has been involved in a romantic relationship with two of her social media colleagues. She dated a famous Instagram star, Andrew Kingsbury in 2014 but the relationship ended after a year. She then got involved with another social media star Alex Hayes in 2016. In September 2016, Eva was bold enough to disclose her bisexual status.