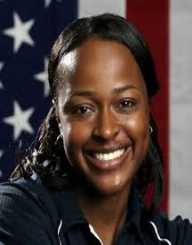 Vonetta Flowers is an incredible lady born on 29th October 1973 in Birmingham, Alabama. She gained her athleticism on the tracks in high school and the University of Alabama. Flowers tried many times for a spot on the Olympic team but failed.

Vonetta Flowers attended the P.D Jackson-Olin High School where she excelled in both basketball and track. She proved to be an excellent athlete and got awarded with a scholarship in track and field to join the University of Alabama in Birmingham.

Vonetta became the first person in her family to join the university. She continued to excel at the university and racked up a lot of MVP honors. At the end of 1997, she managed to graduate with a degree in physical education.

Vonetta Flowers then turned her attention to the Summer Olympics. She tried twice in 1996 to qualify for the Olympics but failed. Flowers had set her mind to the 100-meter dash and the long jump but did not meet the requirements.

Johnny Mack Flowers drew her attention to a new recruitment opportunity in bobsledding.  The bobsledding idea sounded good, so she decided to take a crash course. Together with her team by the name Bonny Warner with only two weeks training they set a world record in October 2000 at Park City Utah. They received other victories like a gold medal performance at the World Cup.

In 2002 at the Winter Games, in Utah, Vonetta Flowers and her teammate Jill Bakken gave the U.S.A a resounding victory. They both won a gold medal in the women’s category, giving America a chance to shine with a gold medal after such a long wait.