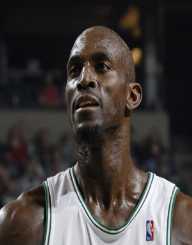 Kevin Maurice Garnett, an American Professional Basketball player, was born on 19 May 1976 in Greenville, South Carolina to Shirley Garnett and O’Lewis McCullough. Kevin is a lovechild as his parents were never officially married. His father O’Lewis McCullough deserted his mother shortly after his birth. Kevin was the second of the three siblings and grew up with his mother Shirley Garnett and stepfather Ernest Irby. His relationship with his stepfather was not conducive enough to get along well.

Kevin Garnett’s love for the sport of Basketball blossomed while attending the Hillcrest Middle School. But it was the Mauldin High School in Mauldin, South Carolina where he started playing organized basketball. During his first three years of high school education, he represented Mauldin High School in the basketball team. He left Mauldin High School after three years and was transferred to Farragut Career Academy, Chicago, for his senior year of high school. His transfer came amidst an unfortunate racial controversy. He was charged with second-degree lynching but was subsequently exonerated.

Kevin Garnett's exploits in the basketball field started showing outstanding results during his days in Farragut Career Academy. He was named National High School Player of the year by ‘USA Today’ after he led Farragut to a 28-2 record. He was also titled Mr. Basketball for the State of Illinois around the same time. At the 35th anniversary of the McDonald’s All-American High School Boys Basketball Game, Garnett was titled as the Most Outstanding Player and was also honored as one of the 35 Greatest McDonald’s All Americans.

A huge controversy erupted during 1999-2000 season. NBA declared the free agent signing of Joe Smith as illegal. The owner of the team was penalized, and the team was stripped off three first-round draft picks. But in spite of all the drama, Kevin Garnett was focused on his task and kept on improving his performance. In the next season, he was nominated for All-NBA Second Team.  In 2004, Garnett lead Timberwolves to the Western Conference Finals and personally achieved the distinction of NBA Most Valuable Player Award.

In 2004-05, though Kevin Garnett was named to the All-NBA Second Team, his team, Minnesota Timberwolves fared very poorly and logged the second worst record during Garnett’s tenure. Garnett was traded off to the Boston Celtics in 2007 after serving the Minnesota Timberwolves for 12 consecutive seasons which is a record for the most prolonged period of association with one particular team in the NBA.

In 2008, Garnett became the first Boston Celtic player to be awarded the NBA defensive player of the year award. Boston Celtic players had won all the other major awards till then, and it was the only award which was still eluding the team since the franchise’s foundation in 1946. He also secured the third position in MVP voting for the year.

By 2008-09 Kevin Garnett achieved the distinction of becoming the youngest player to have appeared for 1000 career games in NBA history. Garnett was selected to play in the 2010 NBA All-Star Game. It was his 13th consecutive All-Star Game.

In 2010-11 NBA season, Boston Celtics won 23 of their first 26 NBA games. But due to a knee injury, Garnett had to remain sidelined for two weeks after that. His performance suffered after his return. In 2012, Garnett had a contract extension for another three years with the Boston Celtics. It was a contract worth $34 million at that time. Simultaneously, Garnett was voted to start in the 2013 All-Star Game in Houston.

On the 25th of February, 2015, Kevin Garnett was traded back to Minnesota as he decided to waive his no-trade clause. Garnett made his comeback for the Timberwolves against Washington Wizards at the Target Center. But a nagging knee injury kept him out of action for most of the season.

On July 11, 2015, Kevin Garnett again signed a two-year contract with Timberwolves. He joined the league of legends Kareem Abdul-Jabbar, Karl Malone, Jason Kidd and Elvin Hayes on the 15th of November, 2015 by becoming the fifth player in NBA history to have played for at least 50,000 minutes.

In 2006, Kevin Garnett was conferred with the J. Walter Kennedy Citizenship Award

In July 2004, Kevin Garnett married his longtime girlfriend, Brandi Padilla in California. He could not participate in the Athens Olympics due to the marriage ceremony. The couple is blessed with two daughters. NBA lists Garnett as 6 ft 11 in tall.