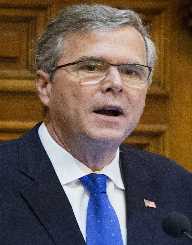 Jeb Bush was born on February 11, 1953. He is an America politician. He served as governor of Florida from 1999 to 2007. He is the second son of the former president of the United States of America George H. W. Bush. He is also an established businessman. As the Governor of Florida, he initiated environmental improvements and implemented reforms to the state education system. He followed in the footsteps of his father and elder brother to become a politician. He is very popular in the political arena of the United States of America.

In 1974, Jeb Bush took up a position in the international division of Texas Commerce Bank. He rose to the rank of branch manager and vice president of the bank’s division in Caracas, Venezuela. In 1980, he began working in real estate with Armando Codina, a prominent businessman. Later on, Codina made Jeb a partner in a new development business. He became a very wealthy businessman as the business flourished. He then moved to Miami to pursue his business endeavours where he became a minority owner of the Jacksonville Jaguars in Jacksonville, Florida. He was also involved in a project that sold water pumps in Nigeria.

In 1980, Jeb Bush volunteered for his father’s presidential campaign. He was later made the chairman of the Dade County Republican Party. He also played a significant role in the 1986 election of Bob Martinez. Bob appointed him as Florida’s Secretary of Commerce. In 1989, he became the campaign manager of Ileana Ros- Lehtinen who was the first Cuban American to serve in Congress. Jed ran for Florida’s governor seat but he was not successful every time he ran. In 1998, he ran for the Governor’s office again and he won. In 1999, he assumed office as the Governor of Florida.

In 2002, Jeb Bush won the re-election and continued being the Governor of Florida. In his post as Governor he initiated environmental improvements and implemented reforms to the state education system. His elder brother, George W. Bush became the president of the United States of America while he was serving his term as governor. Jeb opposed abortion and supported a law requiring parental notification for teen abortions. He made very many improvements during his term as Governor.

In 2003, he was involved in the Terri Schiavo Case where a man wanted to remove life support for his wife who had massive brain damage. He resigned from the governorship in 2007 but he still remained active in politics. In 2015, he announced his candidature for the 2016 Unites States of America presidential elections.

In 1974, Jeb Bush married Columba Garnica Gallo with whom he has three children. He also has four grandchildren. Jeb has an estimated net worth of $22 million.