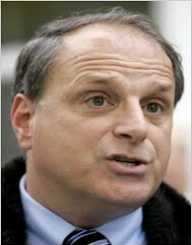 Eric Massa is an American former politician and Navy officer.

Eric James Joseph Massa was born on September 16, 1959, in the city of Charleston, South Carolina. His father was a naval officer, so the family always moved around.

Eric Massa followed in his father’s footsteps. In 1981, he graduated from the U. S. Naval Academy in Annapolis, Maryland. He served on the USS New Jersey as a Surface Warfare Officer. He was an aide to General Wesley Clark, a former NATO Supreme Allied Commander. He served in the Navy until 2004, rising to the rank of Lieutenant Commander. He retired after being diagnosed with lymphoma, which he later managed to beat.

Eric Massa married a woman named Beverly. They have two sons, named Justin and Richard, and a daughter named Alexandra.

Eric Massa retired from the military and moved to the town of Corning, New York. He started working as a project manager for the photonics division of the Corning Glass Company. In 2004, he campaigned in New Hampshire for the presidential bid of Wesley Clark. He left the Republican Party over ideological disagreements and became a member of the Democratic Party.

In 2006, Massa decided to run for Congress as a representative of the 29th District. He was against the Iraq war, and he advocated for fair trade and farm aid programs. He lost the election to opponent Randy Kuhl. He ran for the second time in the 2008 elections. This time, he managed to defeat Kuhl.

On March 3, 2010, Eric Massa claimed that he would not run for Congress again because his cancer had returned. The next day, the House Ethics Committee announced that they were investigating allegations that Massa had sexually harassed several young male staff members. On March 5, he announced that his resignation from Congress due to his health and the ongoing investigation. He later claimed that there was a conspiracy against him because he opposed the Patient Protection and Affordable Care Act.