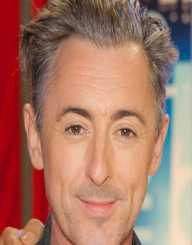 At the age of 16, after graduating from high school, Alan took up the job of a sub-editor at ‘D.C. Thomson Publishers’. He engaged the readers of the magazine by writing a column titled ‘Young Alan.’

Alan’s big break came with Manfred Karge’s 1988 theater production ‘Conquest of the South Pole’. The play was first staged at ‘Traverse Theater’ in Edinburgh and Alan depicted the role of Slupianek. Later, the play was transferred to London’s ‘Royal Court’. Alan’s impressive portrayal received wide applause and he was nominated for the ‘Most Promising Newcomer’ Olivier Award. Alan continued to don various hats in different plays and also worked with Bristol Old Vic and the Royal Shakespeare Company. Shifting base to London in 1991, Alan started working for the ‘Royal National Theatre’. Subsequently, he won the Laurence Olivier Award for ‘Best Comedy Performer’ for his portrayal of The Madman in Daniel Fo’s ‘Accidental Death of an Anarchist’.

1986 marked Alan’s entry into the film world with Gillies MacKinnon’s ‘Passing Glory’. Alan’s feature film debut happened in 1992 when filmmaker Ian Sellar roped him to play a pivotal role in his drama film ‘Prague’. The film premiered at the Cannes Film Festival in 1992 and Alan’s acting received critical acclaim. He also bagged a ‘BAFTA’ nomination for ‘Best Actor’ and won the ‘Best Actor Award’ at the Atlantic Film Festival. In the same year came Alan Cumming’s award-winning characterization of Bernard Bottle in the 1991 BBC Comedy ‘Bernard and the Genie’.

He played the supporting role of Eli Gold for the CBS legal drama, ‘The Good Wife.’ For this role, he was nominated for two Primetime ‘Emmy Awards’, two ‘Screen Actors Guild Awards,’ a ‘Golden Globe Award’ and a ‘Satellite Award.’

Alan Cumming’s childhood experiences had a profound impact on his behaviour. He is an atheist by belief, a self-proclaimed bisexual and a vegan since 2012. His first partner was childhood sweetheart Hilary Lyon, and they were married for eight years from 1985 to 1993. The childless couple parted ways with mutual consent. He had also dated actress Saffron Burrows for two years and was in a relationship with theater director Nick Philippou for six years.