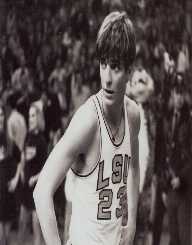 Born on June 22, 1947, Pete  Maravich was a professional basketball player from America. Best known as the Pistol Pete, he was well known for his signature sideways and long shootings. Throughout his career, Pete  Maravich played for three NBA teams and also starred in Louisiana State University. He holds the record for leading NCAA Division I scorer with an average point of 44.2 per game and 3,666 points score.

Pete  Maravich is acclaimed as the greatest offensive talent in history and one of the youngest to be inducted into the Naismith Memorial Basketball Hall of Fame. All his achievements were however achieved before the introduction of the three-point line and shot clock.

Pete  Maravich was born on June 22, 1947, to Helen Gravor Maravich and Petar Press Maravich in Aliquippa. Maravich interest in basketball and his skills and abilities developed at his young age. Lucky for him his father was also a basketball coach so helped him to sharpen his skills. Coupled with motivation, Pete  Maravich learned at a quick base with ball control tricks, head fakes and passes. During his high school days at the Daniel High School, he played high school varsity ball. Pete  Maravich also took part in games of the schools.

Pete  Maravich dad resigned his coaching work at Clemson University to join North Carolina State University which necessitated the family to move to Raleigh, North Carolina. He then schooled at the Needham B. Broughton High School where he has also involved basketball. He got the nickname Pistol Pete Maravich because of his ability to shoot the ball from his side. He graduated in 1965 and moved to Edward Military Institute where he was also a prolific shooter.

Pete  Maravich was offered a place in the Louisiana State University basketball team by his dad even though it was his wish to play for West Virginia University. Pete  Maravich was however forced to play on the freshman team because first-year students were not allowed to play at the varsity level. His first game was against the Southeastern Louisiana College in which he made an impressive 50 points, 14 rebounds, and 11 assists. His last college game was during the National Invitation Tournament in 1970. He played for the University from 1968 to 1970 and made 3,667 points with an average of 44.2 points. These records have since not been broken by anyone. According to pundits of the game, Maravich’s record would have been higher if a measure like the three-point line and shot clock were in place at the time.

Pete  Maravich was signed to the Atlanta Hawk in a 1.9 million contract in 1971. Fitting in the team became a problem since he was new to their style of play. He appeared in 81 games and made an average point of 23.3 which earned him an NBA All-Rockie Team honor. His second season was not an impressive one as compared to the first. His average score reduced to 19.3 points per game. Pete  Maravich in his third season was able to find his scoring abilities and made an average point of 26.1 and 6.9 assist per game. He ended the season with 2,063points and earned a place in the NBA All-Star Game.

New Orleans Jazz in 1974 approach Pete  Maravich to play in their team after qualifying to the NBA. To have his services,New Orleans Jazz traded two players and four draft picks to high former team Atlanta. In his first season,Maravich managed to score an average of 21.5 points per game. In the second season, Pete  Maravich just played in 65 games and made an average point of 25.9. That year, he made it to the All-NBA First Team despite his injuries. He had a prolific 3rd season with the team scoring an average of 31.1points per game. Pete  Maravich led the league that year and made a record of scoring 68 points on a single against the Knicks. As usual, he made it to the all-star game and honored as All-NBA First Team for two consecutive seasons. Injuries started to hit him during the 1977-78 season.

Pete  Maravich missed about 32 games and managed an average score of 27.0 points with 6.7 assists. Injuries continued to take the best out of him in subsequent seasons. In the 1978-79 season, he played in 49 games with an average of the point of 22.6. Pete  Maravich moved with the team to Salt Lake City when the owner decided to move and change the name to Utah Jazz. Things became worse in that season as injuries caused him greatly. He only played in 17 games. His less game appearance made Jazz released him to Celtic in 1980. Maravich helped the team and also made one of his personal best. However, the injuries became severe and had to retire in 1981.

A true talent in the basketball was lost because Pete  Maravich had to leave the game due to injuries in 1980. During to time he felt lonely and sought for peace in the heart and mind. This made him try yoga and Hinduism but later found peace with Christianity. He actually said he don’t want to be remembered as a basketball player but as a Christian who served Jesus utmost. Pete  Maravich heart failed and died while playing basketball in a gym at First Church of the Nazarene in Pasadena, California. He died on January 5, 1988, at age 40 of congenital defect. Pete  Maravich was married to Jackie McLachlan and had two children Jeason and Josh.

Pete  Maravich co-authored the autobiography Heir to a Dream which centered on his life after basketball career in 1987.

Pete  Maravich was posthumously honored by the Louisiana Governor by renaming the LSU home court the Pete Maravich Assembly Center. He was named one of the 50 Greatest Players in NBA History in 1996. He was also named the greatest college basketball player of all time by ESPNU.