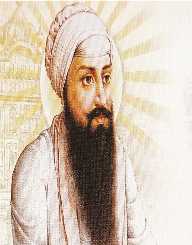 Amar Das was born 5th May 1479, to Tej Bhan Bhalla, and Bakht Kaur. He was born in the village of Basarke, in what is now known as Punjab, India. His father was a farmer, and both parents were devoted Hindus which included vegetarianism and Amar Das followed in their footsteps.

Amar Das became familiar with Guru Nanak when he heard a family member reciting one of Guru Nanak’s hymns. She introduced him to her father, Guru Angad, and at the age of 60, Amar Das became a devotee of the Guru, converting to Sikhism. Guru Angad died in 1552, and after his death, Amar Das became Guru Amar Das, the third Guru of Sikhism.

Guru Amar Das was instrumental in advancing protocols within the Sikh religion. He introduced the Manji system of having trained clergy, a system that is still in use today and also introduced the tithe, or giving of 10 percent. He wrote a book of hymns, including the Anand hymn, which is sung as part of the rituals in relation to baby naming, weddings, and funerals. Guru Amar Das was also responsible for festivals such as Diwali, Maghi, and Vaisakhi.

He also picked the site for the Golden Temple. Guru Ram Das began the building, and Guru Arjan completed it. It is the most sacred of sites for pilgrimage in Sikhism. Guru Amar Das advocated both being spiritual, as well as living daily life in an ethical manner. He was the Sikh’s leader until he was 95 years of age, at which time he passed the mantle to his son-in-law, Bhai Jetha. Bhai Jetha became known as Guru Ram Das.

Guru Amar Das married Mansa Devi, and the couple had four children. Their names were Mohri, Mohan, Dani, and Bhani.

Guru Amar Das was a much loved and respected leader, who put many customs and rituals in place for Sikhism, which are still in use in the modern age.