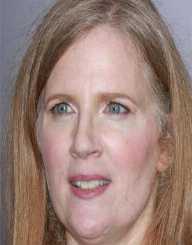 Known most specifically for The Hunger Games trilogy, famed writer Suzanne Collins was born in the year 1962 on August 10 in Hartford, Connecticut. Her parents were Jane Brady Collins and Michael John Collins. Her father was a Lieutenant Colonel in the U.S. Air Force who was highly decorated more than once through his years Korean War and Vietnam War. However, during Suzanne's childhood, he was a college history professor. Suzanne herself has stated that as a result of her father's military experience and occupation in education the subject of history and its importance was stressed in her young years.

Suzanne Collins and her family moved around throughout her youth. After living temporarily in places like New York, the family found themselves in southern Alabama where they would stay. In 1980, Collins earned her high school diploma from the Alabama School of Fine Arts. After graduating, she applied and was accepted Indiana University. She went on to double major for a Bachelors degree in theater and telecommunications in 1985. After this, she moved back to New York and enrolled in New York University Tisch School of the Arts. It was here that she earned her Masters in Dramatic Writing four years later.

After finishing her Master's Degree, Suzanne Collins started her first step in her writing career in the category of television. Most specifically this included children's TV shows. She landed jobs for both Nickelodeon and Scholastic Entertainment. Some, but not all, of the shows she worked on, include a Clifford spinoff Clifford's Puppy's Days, Little Bear, Files of Shelby Woo, Clarissa Explains it All, and Oswald. Her work in this field is considered to be both successful and fulfilling at the time. She was even nominated for Writers Guild of America award for Santa, Baby!

Her success opened up many doors. Suzanne Collins became the head writer on a show called Generation O! for WB Kids. Her boss, James Proimos, is said to be the one to give Suzanne the motivational push towards writing her own children's books.

Suzanne Collins did just that. In 2003, after motivation and inspiration from Alice in Wonderland, she wrote and published her first book Gregor the Overlander. To cut a long story short, it is the story of a boy who falls through an apartment laundry chute and into a new fictional world. The book was an immediate success and even became a New York Time's Best Seller.

The success of Grego the Overlander caused it to seed the creation of a series of five. Over the next few years, the other four books of the Underland series was written: Gregor and The Prophecy Bane, Gregor and the Curse of the Warmbloods, Gregor and the Marks of Secret, and Gregor and the Code of Law. In the midst of the writing of these books, in 2005 to be more specific, Suzanne wrote When Charlie Mcbutton Lost Power. All of her books were considered successes by both critics and regular readers alike.

Spawned with personal influence from her life growing up and tons of creativity comes from Suzanne Collins' next book series, The Hunger Games. It is stated that her influence for the book came from Greek mythological aspects and concepts in addition to what she learned from her father about his time in the army and times of war. Elements from the stories can be related to those of that kind considerably. Specifically, the ones about dystopia, poverty, and so forth.

In 2008, through Scholastic Press, the first book in what would become a trilogy was released: The Hunger Games. The book was both a commercial and critical success. Following the first book was a second novel, Catching Fire, September 2009 and a third, Mockingjay, in August of 2010. At this point, The Hunger Games had been a New York Times Bestseller for longer than a year straight. While Suzanne Collins could've been regarded as a reputable and known writer before the writing of this series, she was no doubt sent directly to fame in sight of the public eye with the release of this trilogy of books.

As a result of the success and popularity of the books, Lions Gate Entertainment set out to acquire media rights to the series and create a film series adaptation. Suzanne Collins herself dealt greatly with the book to movie transition, and Gary Ross was selected as the director. In 2011, the ball began rolling with the filming. Rising actress Jennifer Lawrence, from Kentucky, was chosen as the lead role playing Katniss Everdeen. Actors Josh Hutcherson and Liam Hemsworth played Peeta Mallek and Gale Hawthorne accordingly.

In 2010, Suzanne Collins wrote a sequel When Charlie McButton Gained Power. And in 2013, Suzanne wrote and published a visual autobiography titled Year of The Jungle. It is about a father leaving his daughter for war and the struggles that face her. The book tends to be aimed at the younger audience as did her earlier writings.

It is not a surprise that the appreciation for Suzanne Collins was high. All of her books, to this day, have remained commercial and critical successes. Additionally, The Hunger Games movie series, even with some of its below average reviews, are highly known internationally.

In 2010, Suzanne had been named a Most Influential Person by Time Magazine. She also topped Amazons Kindle list respectively in addition to the hard copy list many different times following her releases.

Not much is known about Suzanne Collins' personal life. However, it is known that she lives in Sandyhook, Connecticut. She is happily married to an actor and has two kids named Charlie and Isabel.