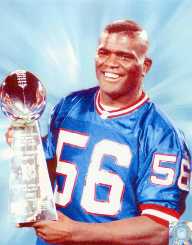 Lawrence Taylor “LT” was a linebacker for the New York Giants, starting in 1981 for thirteen years, he retired in 1994. He was nicknamed Superman and thought to be the best defensive player in NFL history, but the most feared.

Lawrence Julius Taylor was born on 4th of February, 1959. He is the middle child of the three sons born to Clarence and Iris Taylor in Williamsburg, Virginia. His father Clarence was a dispatcher at the Newport News Shipyards, his mother a schoolteacher. Lawrence concentrated on baseball, playing the catcher.

Lawrence Taylor started playing football when he was in 11th grade at Lafayette High School. After graduating in 1977, he studied in University of North Carolina at Chapel Hill. In UNC, he was a team captain in their football team. Initially a defensive lineman, his problems with focusing caused him to move from noseguard, to inside linebacker, to outside linebacker. Eventually the coaches allowed him to make the inside linebacker a position of his own in 1979.

After that, Lawrence Taylor ended up with eighty solo tackles in his junior year, which led to seven fumbles. He was quickly nicknamed “Godzilla.” In 1980 he was recognized as first team All American and the Atlantic Coast Conference Player of the Year, thanks to his 16 sacks. After he graduated, UNC retired his jersey no. 98.

Taylor made his NFL debut on August 8, 1981, recording 2 sacks to win over the Chicago Bears. From then, he continually produced good results by rushing through offensive formations. His career high was in 1986, where he recorded 20 ½ sacks. He was suspended twice in the league for testing positive for drugs.

Lawrence Taylor changed how linebackers operate during his career.. Lawrence invented the move to chop the ball off a quarterback’s hands instead of tackling them, which was a new defensive way to play. Coaches used to be unable to stop Lawrence, until someone developed a play. To block linebackers like LT, coaches made it common for offensive linemen to pick up blitzing linebackers, changing the defense and offense mechanism.

Lawrence Taylor was the second defensive player in NFL history to win an MVP award for the league in 1986. He was named First- Team All-Pro and won ten Pro Bowls for his first seasons playing in professional football.

Lawrence Taylor married Deborah Belinda Taylor in 1981 and they had three children together, before separating and divorcing in 1996. He married Marita Cruz in 2001 but only lasted until 2005. At present, he is married to Lynette Taylor, who was arrested for domestic violence last year. He has three kids from the first marriage: Lawrence Taylor Junior, Iris Taylor and Clarence. Lawrence Taylor also has four kids from other women born out of wedlock.

Lawrence Taylor’s prowess on field is matched by his ability to drink alcohol, he was suspended twice due to drug use. Lawrence remained clean after the second suspension as the third offence would have ended his career. He went into drug rehab twice in 1995, but fell off the wagon and was arrested later. LT credited playing golf to stopping taking drugs, as drug rehab did not suit him, he managed to stay clean for the last five years of his career.

After retirement, Lawrence Taylor was back taking drugs and drinking alcohol. He was arrested and charged a few times for Driving under Influence. And was jailed three times for attempted drug possession. In 2009, he was arrested for having sex with a minor, he pleaded guilty for misdemeanors of sexual conduct and patronizing a prostitute, as he said that the girl lied about her age. As result of the charge, Lawrence was dropped as Nutrisystem spokesman. In 2012, the court rejected the minor’s claims that he had assaulted her.

After his NFL career ended, Lawrence Taylor dabbled in acting. He appeared in The Waterboy, When in Rome, Mercy Streets and In Hell. He was in his own autobiography film titled LT: The Life & Times. He also lent a voice in video games, Blitz and Grand Theft Auto: Vice City.

LT was in a one-off wrestling debut against Bam Bam Bigelow in Wrestlemania XI, which he had won against. Lawrence continued to appear on television as a football analyst and commentator.

It was rumored that Lawrence Taylor had a secret deal with Donald Trump. He would have a million-dollar interest-free loan for agreeing to join the Generals when his contract with the Giants expired. When the Giants upgraded his deal, Lawrence had to repay the money, plus the interest he had collected.The Giants had to pay Trump $750,000 over the next five seasons for allowing the deal to break, in addition to LT’s six-year, $6.2-million-dollar contract.