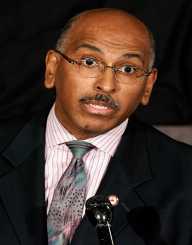 Michael Stephen Steele was born on October 19, 1958, at the Andrews Air Force Base in Prince George’s County, Maryland. As a baby, he was adopted by William and Maebell Steele. His stepfather died in 1962, but his stepmother worked as a laundress to raise her children. When her husband died, she refused to apply for public assistance, telling her son that she did not want the government raising her children. She later remarried to a truck driver, John Turner. He and his sister Monica Turner were raised in a North-Western part of Washington, D.C. His sister was married to the boxing champion Mike Tyson.

Steele received his education from the Archbishop Carroll Roman Catholic High School in Washington, D.C. He was a member of the school’s glee club and participated in many of the school's drama productions. He was also a member of the National Honor Society and was elected as the student council president in his senior year. In 1977, Steele began studying at the John Hopkins University in Baltimore. He received a bachelor’s degree in international studies. After graduating from John Hopkins, Steele spent three years preparing for the Catholic priesthood at the Augustinian Friars Seminary and in the meantime taught classes in world history and economics at Malvern Preparatory School in Pennsylvania. However, Steele left the seminary before his ordination and enrolled at the Georgetown University Law Center. He attended night classes and in 1991 received Juris Doctor degree. He failed the bar exam in Maryland but passes in Pennsylvania.

After passing his bar exam, Steele began working as a corporate securities associate at Cleary, Gottlieb, Steen & Hamilton office in Washington, D.C. He specialized in financial investments for Wall Street underwriters. He also worked at the firm’s Tokyo office on product liability litigation as well as in London on corporate matters. In 1997, he left the firm and founded Steele Group, his own legal consulting firm.

In 2002, Steele was selected by Robert Ehrlich as his running mate for Lieutenant Governor. The ticket won 51% of the votes, becoming the first republicans in Maryland to win in almost 40 years. During the Ehrlich administration, Steele reformed the state’s Minority Business Enterprise program and chaired the Governor’s Commission on Quality Education in Maryland. At the 2004 Republican National Convention, Steele gave the counterpoint to Barack Obama’s keynote address, making his first national exposure. In 2005, he was chosen as a member of the U.S. delegation at the investiture of Pope Benedict XVI.

In 2005, Paul Sarbanes announced he would not seek for re-election to the U.S. Senate in 2006 election. Steele was pressed by his party to run for the seat. Steele officially announced his candidacy in October 2005. He won the Republican nomination in the primary election. His campaign focused on low taxes, less government spending, free markets and national security. However, in the general election, Steele lost to the Democrat candidate Ben Cardin with 44% to Cardin’s 55% vote.

In 2007, Steele became the chairman of the political action committee GOPAC. The committee helps to fund local and state Republican campaigns and is responsible for training the future Republican candidates. The same year, he also joined the international law firm Dewey & LeBoeuf as a partner in the Washington, D.C. office. In 2010, he was considered as a candidate for Governor of Maryland but never ran for the position. He also publicly announced that he would not run for the presidency.

In 2009, Steele began his campaign for the 2009 Republican National Committee chairmanship. He won the election in the sixth round, becoming the first African American chief of the Republican Party. During the 2010 Congressional cycle, RNC broke its fundraising records, raising more than $198 million. The party also won 63 House seats- the biggest count since 1938. In 2010, Steele announced that he would not run for re-election as the chairman for RNC.
After his chairmanship tenue ended, Steele became a regular political analyst for MSNBC. He also began working as a columnist for the online magazine The Root, owned by The Washington Post Company. In 2010, he released his book Right Now: A 12-Step Program for Defeating the Obama Agenda.