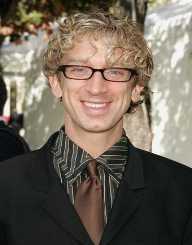 American television actor, comedian Andrew Roane Dick was born as Andrew Thomlinson on December 21, 1965, in Charleston, South Carolina, United States of America. He was adopted at birth by his foster parents, Allen and Sue Dick. His father was employed in the U.S. Navy causing Dick’s family to move around various places during his growing years. He was raised in a Presbyterian family and spent his early childhood days in Connecticut, Pennsylvania, New York.

Andy Dick accompanied his family to The Socialist Federal Republic of Republic of Yugoslavia before being relocated again to Chicago in 1979. After attending Lassiter High School, then housed at George Walton Comprehensive High School in Cobb County,

An exhibitionist and attention seeker since his childhood, Andy Dick was quite successful in garnering the attention of other people including the fellow kids being almost always a new entrant in schools due to his father’s frequent transfer to various places. He was very keen on making people laugh since his early childhood, and this quality was an added attraction of his personality.

Andy Dick also developed a habit of running naked around his neighborhood which was one of the items of his pranks. As such, while his father was busy moving around in a submarine, Dick grew up to be a Navy brat being neglected by his parents who failed to give him a proper upbringing.

After moving to Chicago, Dick started studying comedy from the renowned Second City Troupe. He also attended the Columbia College Chicago. Dick took lessons in improvisational comedy at iO Theater. Later, when he moved to Los Angeles, California, he joined the Los Angeles branch of the Second City Troupe there.

Andy Dick started his television career as an ensemble cast on the sketch comedy program ‘The Ben Stiller Show’ along with Ben Stiller, Bob Odenkirk, and Janeane Garofalo. The program was a Fox Network presentation and was aired between September 1992 to January 1993. Before his work on The Ben Stiller Show, he appeared in some not so popular television programs including ‘Anything but Love’ (1989), ‘Sydney’ (1990) and ‘Earth Angel’ (1991. His popularity, as well as his demand as an actor, shot up halfway to the telecast of The Ben Stiller Show and he started getting a steady flow of works both in television as well as in films. From 1993 to 1995, he played different characters on television programs like ‘Flying Blind’ (1993), ‘The Building’ (1993), ‘The Nanny’ (1994), and ‘Get Smart’ (1995). His simultaneous work on films as well saw him appearing in films like ‘Elvis Stories’ (1989 - short film), The Making of '...And God Spoke' (1993), ‘Reality Bites’ (1994), ‘In the Army Now’ (1994), ‘Double Dragon’ (1994) and ‘Hotel Oasis’ (1995 - short film). In 1995, he grabbed one of the important roles of his career when he landed a role in the popular American sitcom ‘NewsRadio’.

The hilarious comedy includes Dave Foley, Phil Hartman and Maura Tierney besides Andy Dick as its central characters. The 97-episode sitcom concluded on May 4, 1999, having aired its first episode on March 21, 1995. From 1999 to 2001, he continued to appear in several television programs and also played different characters in some films.

In 2001, Dick started his comedy program ‘The Andy Dick Show’. The 21-episode sketch comedy series was aired on MTV between February 2001 to May 2002 where Andy Dick performed the role of the executive producer as well as the main anchor beside writing the content of the show.

Dick’s popularity as a wacky comedian went on ascending with time. In 2002, he was associated with another popular sitcom ‘Less Than Perfect’.

The 81-episode American sitcom was originally aired on ABC from October 1, 2002, to June 6, 2006. In 2004, Dick again doubled up as an actor-cum-executive producer in ‘The Assistant,’ a reality TV program imitating Donald Trump's

Work continued to pour in for Andy Dick both from television as well as from films in the new millennium. Besides appearing in some films and television programs, he lent his voice for an animation film titled ‘Hoodwinked Too! Hood vs. Evil’ (2011). In 2013, he participated in the television reality show ‘Dancing with the Stars’ as a contestant and was most excited about his dance performances.

The dance was close to his heart as he felt that the steps took him back to his teenage days where he used to perform such tap-dancing.

His later works include a film appearance in ‘Zoolander’ (2016) and a comedy television program called ‘Workaholics’ (2016). He has continued to work till date.

Andy Dick married Ivone Kowalczyk in 1986 which ended up in divorce during 1990. They together have a son, Lucas, who was born in 1988. Besides, he also fathered a son and a daughter, Jacob, and Meg respectively, as a result of his relationship with Lina Sved.

Though popular as an actor and a versatile comedian, Andy Dick is quite infamous for his off-screen demeanor. He was a nuisance in the Hollywood parties creating scenes and going wild after heavy drinking along with similar characters like Chris Farley. He also has a long history of drug abuse and repeated attempts at rehabilitation to kick out the addiction.

Andy Dick was involved in police cases too for drug-related as well as sexual abuse. He was arrested and prosecuted sometimes on charges of possessing various contraband narcotic substances and also for driving and causing accidents under the influence of alcohol/drugs. He has confessed that his sexual orientation is bi-sexual.