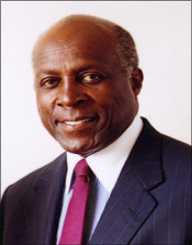 Vernon Jordan Jr. is an American politician and civil rights activist who has worked under Bill Clinton’s administration. Besides being involved in politics, Jordan is also an active businessman and has served as board members to prestigious commercial businesses in the United States. He has a biography entitled Vernon Can Read! which was published in 2001 and was written by Annette Gordon-Reed, a legal scholar and historian.

Vernon Jordan Jr. was born in Atlanta, Georgia on August 15, 1935, to parents Mary Belle and Vernon Jordan Sr. He spent his formative years at one of the earliest segregated communities of Georgia, funded by the government. As a young boy, he was an exceptional student and graduated at David Tobias Howard High School with honors.

Following his high school graduation, Jordon enrolled at DePauw University located in Greencastle, Indiana. While a university student, he earned extra money by working as a chauffeur for Robert Maddox, the city’s former mayor. He received his degree in political science in 1957. At the time, he was the only African-American student enrolled in a class consisting of 400 students.

After he graduated from DePauw, Vernon Jordan Jr. returned to his hometown of Atlanta where he found work in the law office of Donald L. Hollowell. At the time, Hollowell was involved as a civil right activist hence Jordan being exposed to activism as well. In the early 1960s, he left Hollowell’s law firm to pursue social activism.

A year before his term ended as the president of the National Urban League, Vernon Jordan Jr. was shot and wounded while he was in Fort Wayne, Indiana on May 29, 1980. He survived the assassination attempt but took a while to recover from the injury. The gunman was identified as Joseph Paul Franklin. Franklin was acquitted with a charge of attempted murder in 1982, but he admitted the hit on Jordan in 1996.

Vernon Jordan Jr. entered the world of politics by serving as Bill Clinton’s political advisor. At the time, Clinton was appointed as president of the United States. Jordan and Clinton were already friends even before Clinton was elected as president. He rendered service to the president as the unofficial advisor from 1992 to 1993. He was caught in a controversy when Clinton’s name was caught up in a harassment scandal with White House intern Monica Lewinsky in 1998.

Outside politics, Vernon Jordan Jr. partook in the business industry. He serves as a member the board of directors of several well-known companies such as J.C. Penney Corporation, Dow Jones & Company, American Express, the Asbury Automotive Group, Sara Lee, Revlon, and Nabisco to name a few.

Vernon Jordan Jr. married two women in life. His first marriage was to Shirley Yarborough who he met while law at Harvard University. Their union brought forth a daughter named Vickee. Their union came to an end when Shirley died in 1985. A year later in 1986, he married Anne Dibble, his second wife.