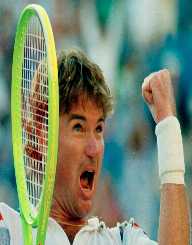 Stats speak more than words for this former World #1 tennis player from America. Jimmy Connors holds eight grand slam titles to his name. He remained the No. 1 player for 160 weeks, the streak starting in 1974.

Known for his extreme athleticism and strong two-handed backhand, Connors was also known for his blatant, offensive behaviour both on and off the tennis court. Regardless, he has left a legacy in the tennis world that only the greats can hope to match or surpass.

His mother was an amateur tennis player and her passion for the game was transferred into Connors. Right from an early age, he showed promise, and his dedicated mother ensured that he got the best coaching available While growing up, Connors didn’t see much of his father, but his mother and grandmother evidently did a great job by turning him into one of the greatest tennis icons.

Jimmy Connors had a long and phenomenal tennis career. He set up several records, some of which have later been bested by greats like Federer.  But at the time, his skills with the racket were unmatched.

Jimmy Connors started early at the age of 9 and began winning small tournaments. He is one of only nine players to win the Junior Orange Bowl twice. At 18 years of age in 1970, his first major victory came against Roy Emerson, another former world number 1. Two years later, he was playing professional tennis.  He won the 1973 US Pro Singles title, against Arthur Ashe, his first major league title.

Within a year after his first major title, Jimmy Connors had accumulated enough fame to be considered a rising star.

The year 1974 established Jimmy Connors as a distinguished player in the tennis world. He went on to win 15 titles including three grand slams that year. His 99-4 win record made it clear that a new champion had entered the arena and it was time for the old veterans to vacate the crown.

For four years straight, his might with the racket shook the tennis world. His fierce two-handed backhand stroke and almost superhuman agility won him many titles. Jimmy Connors spent a total of 268 weeks as the ATP-No. One player. His opponents were players of high calibre and included the likes of Rod Laver, John McEnroe, Arthur Ashe and Ivan Lendl.

There are a time and place for everything, even the most resilient players. In the late 1980s, Jimmy Connors' age began to show its effect.
He no longer was as agile as in his youth. Connors won his final tournament in 1989 in Tel Aviv. He also reached the semi-final at the 1991 U.S. Open. Throughout his celebrated career, Connors was never able to win a French Open. He played his last match in 1996.

Jimmy Connors has been active as a coach and a commentator after retirement. His most notable students are Andy Roddick, Maria Sharapova & Eugenie Bouchard.

Jimmy Connors won the ATP Comeback Player of the year award in 1991.

The tennis legend was inducted into the International Tennis Hall of Fame in 1998.  He has a star on the St. Louis Walk of Fame.

At the peak of his career, Jimmy Connors was in a relationship with tennis star Chris Evert. They were labelled the ‘Lovebird Double.’ This relationship, however, did not turn into marriage.

He then dated former Miss World Marjorie Wallace in 1977.

Jimmy Connors finally settled into married life with former playmate Patty McGuire. The couple live in Santa Barbara, California and have two children. He has a brother named Johnny.

Connors has written an autobiography titled ‘The Outsider’ which chronicles his life’s journey.