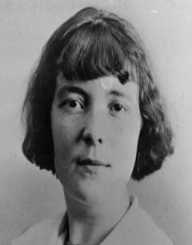 American writer Katherine Anne Porter was born on the 15 May 1890 in Indian Creek, Texas to Mary Alice Jones and Harrison Boone Porter. Her father was a descendant of Jonathan Boone who was the brother of the American explorer Daniel Boone. Her father was also related to the writer Sidney Porter.

Porter’s mother died in 1892 and she, along with her four siblings, went to live with her grandmother. Her grandmother died when she was eleven, and the family lived a transient life with their father before Porter was placed in a school run by nuns. In 1906, when she was sixteen, she moved away from the convent.

Porter was a pupil at the Thomas School, San Antonio, Texas in 1904 but her knowledge was patchy, and she left school at sixteen.

Porter had an early marriage which lasted three years, and after her divorce, she moved to Chicago and tried to forge an acting career and then returned to Texas where she worked as a singer and secretary. For two years Porter had a job working for the Fort Worth publication Critic as a columnist (1917).

Porter then worked for the Rocky Mountain News in Colorado (1918-1919) after which she moved to New York City where she started working as a journalist and freelance writer to support herself. In 1920 Porter worked in Mexico for a magazine as the English editor for El Heraldo de México. During this time met Diego Rivera and became interested in revolutionary politics.

Porter's first published story, Maria Concepcion, appeared in Century magazine then in 1930, her first book, Flowering Judas, a collection of short stories, was published, critics liked the book, but it did not sell many copies. Porter was awarded a Guggenheim fellowship, and she used it to travel to Mexico and Germany in 1932. She also lived in Basel, Switzerland and Paris, France when her husband at the time, Eugene Pressley, was in the employment of the American foreign service.

Her second book, Hacienda was published in 1934 and Noon Wine, a novelette appeared in 1937. Pale Horse, Pale Rider was released in 1942 and included the novelette Noon Wine. In 1944, The Leaning Tower and Other Stories were published. A set of essays, The Days Before was released in 1952. In 1962, the novel Ship of Fools came out. This novel was a best-seller and dealt with a group of people and their reaction to the rise of Nazism.

Pale Horse, Pale Rider (1939) was acknowledged when Porter won a gold medal for literature from the Society of Libraries of New York University (1940). She became a member of the National Institute of Arts and Letters (1943). The Collected Stories of Katherine Anne Porter won the US National Book Award (1965) in 1966 as well as a Pulitzer Prize the same year.

Porter also won a Texas Institute of Letters award for her novel, Ship of Fools and was also presented with an honorary degree from the University of Maryland.

Porter married Texan John Henry Koontz when she was sixteen but the marriage was not happy, and they divorced in 1915. She had a brief marriage to Ernest Stock in 1926-1927, living with him in Connecticut during that time. She married Eugene Pressley in 1933 and divorced him in 1939 to marry Albert Russel Erskine Jr., who divorced her in 1942.

Katherine Anne Porter died in on the 18 September 1980 in Silver Spring, Maryland. She was ninety years old. Porter left no direct descendants.

Her childhood home in Texas was turned into a museum.

The Letters of Katherine Anne Porter were published posthumously.

Katherine Anne Porter was diagnosed with tuberculosis in 1915 and spent time in a sanatorium. She also survived the great flu pandemic of 1918 which swept the world and killed millions.