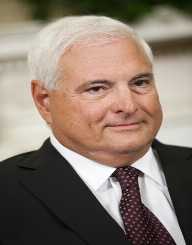 Ricardo Alberto Martinelli Berrocal was born on March 11th, 1952 in Panama City. Martinelli gained his fame for being the former Panamanian president. He served as the president in the period 2009 to 2014. Besides being successful in his political career, he is also a successful businessman with a chain of supermarkets that he owns. These supermarkets are called Super 99.

Martinelli’s career is one that could be associated with humble beginnings. At first, Martinelli worked in Citibank, Panama as a credit officer. He worked in the banking industry for several years before demonstrating his entrepreneurial skills with the purchase of one of his client’s business. He acquired other businesses while at the same time initiating others. Later, this earned him riches as his net worth was approximately $1.1 billion. His success in the business field is what his voters wanted him to bring to the political arena after emerging victorious in 2009 elections.

At the time when Ernesto Pérez Balladares was the president of Panama, Ricardo Martinelli served as the social security director. He served this post from 1994 to 1996. When Mireya Moscoso took over as president from Balladares, again Martinelli was made to serve as the minister of Canal affairs. He served this post for about three years from late 1999 to early 2003.

Around this time, Martinelli had already formulated his party, Democratic Change Party. He participated in the race for presidential office in 2004. Unfortunately, he only managed to scoop 5.3% of the total votes.

Five years later, Martinelli was the president-elect for his party and contested for the 2009 elections yet again. This time round, he had a clear strategy of running office just like he operated his businesses. He promised Panamanian citizens that he would reduce corruption, eradicate violence in the society and bring reform to the tax system.

The nation went through some changes after Martinelli took over as the president. For instance, the country’s economy improved greatly and gained stability like never before. The unemployment rate also went down from 6.6% to an admirable rate of 4.1%. Aside from these notable changes, income disparity also went down. Panama as a nation was hitting the headlines all over with the vast changes it was going through following the election of a new president. Other policies that Martinelli utilized to eradicate poverty in Panama included the introduction of a monthly pension of $100 for the aged, minimum wage increase, providing subsidies to student’s uniforms. During his tenure as the president, the minimum wage was said to be the highest in Latin America.

In 1978, Ricardo Martinelli tied the knot with Marta Linares. Through their shared love for each other, they have three children namely Carolina, Ricardo, and Luis.