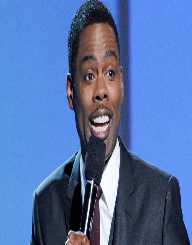 Chris Rock is an award-winning, prominent film actor, director, producer and a stand-up comedian. He is well known for his performances in films such as the acclaimed 2014 comic series titled ‘Top Five', ‘ Grown Ups’ and his voice role in the Madagascar film series of 2005-2012. Other notable films include the 2005-2009 sitcom film, ‘Everybody Hates Chris’ which he wrote, produced and narrated. Remarkably, he has earned three Grammy Awards and Four Emmy Awards.

Chris Rock was born on February 7, 1965, to parents Nee Tingman and Christopher Julius Rock II, in Crown Heights, Brooklyn. However, shortly after his birth, his family relocated to Bedford-Stuyvesant in Brooklyn. His mother’s occupation entailed teaching the mentally disabled while his fathers included driving a truck and delivering newspapers.

Chris Rock has three younger brothers including, Tony, Kenny and Jordan who is also in the entertainment industry. Unfortunately, his father, Julius, died in 1988. His family was faced with yet another tragedy later in 2006 when his half-brother died due to alcoholism.

At a young age, his parents enrolled him in James Madison High School in Brooklyn, an all-white public school, where he was bullied and beaten by white kids. However, he dropped out of high school when the bullying became worse but earned a GED later on. To sustain himself, Rock took small jobs at fast-food restaurants.

The racism Chris Rock experienced at school influenced him to write his comedic material which entails making fun of all sexes and races. His comedies earned him praises from both the African-American communities and the whites.

Chris Rock started his career when Eddie Murphy, noticed his comic performance at a nightclub and decided to mentor him giving him his first film role, ‘Murphy's Beverly Hills Cop II' which he performed in 1987. Additionally, he performed stand-up comedy, ‘Catch a Rising Star’ in New York City. This performance further earned him other roles where he starred in comic films, ‘I’m Gonna Git You Sucka’ and a TV series, ‘Vice.’

Later on, in 1990, he performed a comedy series, ‘Saturday Night Live,’ alongside other four cast members. Over time, they came to be known as the ‘Bad Boys of SNL’. His association with SNL contributed to his national exposure, motivating him to release his first comedy album ‘Born Suspect’. Also, he received commendations for his role as a crack addict in the ‘New Jack City,’ film of 1991.

Notably, Chris Rock played support roles in films such as ‘Beverly Hills Ninja’, ‘Dogma’ and ‘Nurse Betty’. He also starred in movies such as ‘The Longest Yard’, ‘Bad Company’ and ‘Down to Earth’. However, Rock left during the 1992-1993 season of SNL to pursue other opportunities. During this period, he made a guest appearance in a FOX’s film, ‘In Living Color’ for several episodes before cancellation of the show.

Following the annulment of the movie, Chris Rock wrote and starred in a low-budget comedy ‘CB4’. In 1994, he starred in an independent HBO comedy titled, ‘ Big Ass Jokes,’ followed by his subsequent special, ‘Bring the Pain’ in 1996. His outstanding performances earned him critical acclaim and two Emmy Awards. Among his specials, he became famous for ‘Niggas vs. Black People’ and his role as a commentator for ‘Politically Incorrect’, during the 1996 Presidential Elections.

This remarkable performance earned him yet another Emmy Nomination. From 1994-1998, he voiced ‘Lil Penny’ puppet in a series of Nike shoe commercials and hosted the 1997 MTV Video Music Awards. Additionally, Rock performed in two of the HBO comedy series, including the ‘Bigger and Blacker’ in 1999 and the 2004 ‘Never Scared.’

In 1997, Chris Rock hosted his show ‘The Chris Rock Show’ where he interviewed celebrities and politicians. This show won an Emmy award in writing. In general, his television appearances have won him three Emmy Awards and fifteen nominations and acclaim as one of the most well-known stand-up comedians of his generation. Additionally, Rock translated his comedies into a printed book entitled, ‘Rock this!’ and also released his comic albums, ‘Roll with the New’, ‘Never Scared’ and ‘Bigger and Blacker’ which won Grammy Awards.

Moreover, in 2005, Chris Rock produced and narrated a UPN premiered television series titled, ‘Everybody Hates Chris’ based on his school experiences. This show earned a nomination for the Golden Globe for Best TV Series awards by the People’s Choice and two Emmy Awards for costuming and cinematography in 2006. In the same year, he hosted the 77th Academy Awards Ceremony

In September 2008, Rock won yet another Emmy for his Fifth’s HBO special, ‘Kill the Messenger.’ This win was contributed by his outstanding writing music program. Since 2009, Rock has released a documentary ‘Good Hair’ and is working on another documentary performance titled, ‘Credit Is the Devil.’

In 2010, Chris Rock made appearances in films such as ‘Death at a Funeral’, ‘Grown Ups’ and ‘2 Days in New York’. Additionally, he has worked as a director, writer and the lead character in ‘I Think I Loved My Wife’ film and voiced an animated film, ‘Madagascar.’ In 2011, Rock performed the play ‘The Motherfucker with the Hat’ alongside Bobby Cannavale and Annabella Sciorra, a film which earned him a nomination for a Drama League Award.

In 2000, Chris Rock earned two nominations for the Primetime Emmy Awards for outstanding variety series and a Teen Choice Award nomination for Choice Movie Actor-Comedy in 2003. In the same period, he won several awards including the 2003 Grammy Awards for the Best Comedy Album. Also in the 2006 Kids Choice Awards, he won favourite voice from an animated movie.

On November 23, 1996, Chris Rock married Compton Rock, the founder and executive director of a non-profit salon called Style works. Her salon provides free services to women entering the workforce as welfare service. This couple has two daughters; Lola Simone and Zahra Savannah.On August 22, 2006, Rock officially divorced Compton Rock. Despite his fame, Rock regularly speaks of the racism that he experiences and is a vocal critic of Racism.