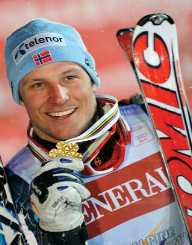 Starting from early childhood, Aksel Lund Svindal was very much interested in skiing. His first skis were given to him as a gift from his parents when he was just three years old, as skiing was an old family tradition. At the age of eight years, Aksel Lund Svindal’s mother Ina died of pregnancy complications. After that, his grandparents helped to raise him.

When Aksel Lund Svindal was just fifteen, he moved to study in Oppdal. This educational institution was famous for letting students ski, and continue the studies. During the time he spent in Oppdal, Svindal joined the Norwegian Junior skier’s team. This allowed him to train more and also travel through Europe extensively as a member of the team.

The first unbeaten start in a competition Aksel Lund Svindal had at the age of eighteen. He participated in the World Cup in 2001.

The next year he continued skiing successfully and won two bronze medals, one silver, and one gold medal. The bronze medals he received for downhill and slalom, the silver for super-G, and golden for the combined discipline.

In the 2005 World Championship Svindal won the silver medal for the combined discipline.

Aksel Lund Svindal participated in the Winter Olympics in 2006. He was unlucky and did not win any medals in the Olympics that year, but won the overall World Cup title. A year later, in 2007, Svindal’s participation in the World Championship won him two gold medals for the combined discipline and the giant slalom discipline.

At the end of 2007, Aksel Lund Svindal had a major injury that prevented him from competing the whole winter season. The accident happened during a downhill training for a race; Svindal crashed into a safety net. The recovery from the injury was relatively slow, and Aksel Lund Svindal returned to professional sports only in 2008/2009.

Interestingly, Svindal had his injury precisely at the same mountain, where he had his injury; this did not influence his result and performance in any way.

The next year at the Word Championship he earned a gold medal for combined and a bronze medal for a super-G discipline.

In 2010 Winter Olympics Aksel Lund Svindal was part of the Norwegian team. He won in total three medals for the team – gold for super-G, silver for downhill and bronze medal for the slalom discipline.

Since the year 2006 Aksel Lund Svindal is ranked as the top 4 skiers in the World Cup. The most noteworthy achievement of Svindal is becoming the first male skier who won a title for four years in a row in a World Championship.

In 2014 Svindal injured his Achilles tendon. This injury prevented him from participating in the World Cup of 2015. The year 2015 was relatively slow for Svindal, but he returned to skiing with full energy in 2016. In 2016 he won seven gold medals in several competitions. At the end of the season in 2016, he got a knee injury while skiing in Austria.

Aksel Lund Svindal was in a relationship with Julia Mancuso for several years. She was also a skier, based in the United States. Their relationship, unfortunately, ended in 2013.