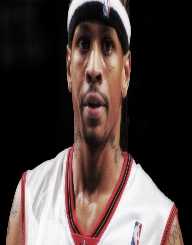 American basketball player Allen Ezail Iverson was born on June 7, 1975, in Hampton, Virginia. He was born to Ann Iverson, who was at the time 15 years old. She raised him as a single parent. Iverson attended Bethel High School. He started to play football in high school as a quarterback and also began to work as a point guard for the basketball team. In his junior year, Iverson led both sides to Virginia state championships.

In 1993, Allen Ezail Iverson was involved in an incident at a bowling alley, where a big fight broke out. He was alleged to have struck a woman in the head with a chair. Iverson denied the charge and said he left the alley as soon as the trouble started.

At the time 17-year-old Iverson was charged as an adult to 15-years in prison with ten years suspended. He spent four months in a correctional facility in Newport News, and the sentence was overturned for lack of evidence.

After prison, Iverson had to complete high school at Richard Milburn High School for risk students. He spent three years, and finally, the head coach of Georgetown University was convinced to come out and meet him. Iverson was granted full scholarship to Georgetown with a spot in Georgetown Hoyas basketball team.

Allen Ezail Iverson’s first season in college was in 1994-1995. He led the team to the Sweet 16 round of the NCAA tournament, but the team lost to North Carolina. He won the Big East Rookie of the Year Awards, as well as was named All-Rookie Tournament First Team.

The following season, Allen Iverson and the Hoyas reached the Elite 8 round of the Big East NCAA tournament. 1995-1996 was his last season in college, and he left the Hoyas as the all-time leader in scoring, winning on average 22.9 points per game.

Beginning of the Professional Career

After leaving college, Allen Iverson was selected to play for the Philadelphia 76ers. His first year, Iverson broke the rookie record of three straight games with at least 40 points, by going five games. 76ers finished the season with a 22-60 record. Iverson was averaging 23.5 points, 7.5 assists and 2.1 steals per game- a score that won him the Rookie of the Year Award. The following year Iverson led the team to the playoffs. He was offered and took a deal of $70 million over six years to continue playing for 76ers.

In 2000, during the offseason, it became apparent that Allen Iverson and the head coach Larry Brown have huge differences. They had agreed to trade Iverson to Detroit Pistons, but the deal didn’t go through. In the 2000-01 season, Iverson started the year with a franchise record of 10 straight wins. He was selected for the 2001 NBA All-Start Game and was named the MVP of the year. During this season, Iverson was averaging 31.1 points. 76ers went to play in the playoff finals against Los Angeles Lakers featuring Shaquille O’Neal and Kobe Bryant. Iverson scored 48 points, and the Lakers lost their only game that year.

The following season started poorly for the 76ers, who were lacking a strong defense. In 2003, head coach Larry Brown left the 76ers.

After Brown left the 76ers, Randy Ayers became the new coach. He failed to develop a good connection with his players, which led to a disastrous season. Allen Iverson had a few incidents with the interim coach Chris Ford, which led to him missing a career-high 34 games.

With a new head coach in 2004-05 season, the Sixers bounced back. During this season, Iverson was averaging 31 points and eight assists. In 2006, it was rumored that Iverson would be traded to play for Denver, Atlanta or Boston, but he remained a sixer. The 2006-07 season started with a 5-10 record for Sixers and Iverson began demanding to be traded. He ended his career at the Philadelphia 76ers with the team’s all-time highest scorer, averaging 28.1 points per game.

Next season, Allen Iverson went to play for the Denver Nuggets. His first year with the team was successful, and the Nuggets went to play in the playoffs but lost to Sacramento Kings. Iverson was fined $25,000 for criticizing referee Steve Javie, who ejected Iverson from the game after two fouls.

Iverson played for the Nuggets until 2008, when he was traded to Detroit Pistons. After only a couple of games, Iverson was benched. The team coach stated that it is due to back injury. The following year Iverson went to play for Memphis Grizzlies, but also stayed only one year with the team.

Allen Iverson went to play for the 76ers again in 2009-10 season. He joined the team on a non-guarantee contract for the league’s minimum wage of $1.3 million. In February 2010, Iverson left 76ers indefinitely, saying that he needs to attend to family matters.

The following year Iverson played for the Turkish Basketball league, but only after three months, he returned to the US for calf surgery. In 2013, Iverson announced his retirement. In 2014, his jersey number 3 was officially retired.

Allen Iverson has had a few incidents with law enforcement. In 1997. Police stopped he and his friends and he was arrested for marijuana possession and carrying a concealed weapon. He was also thrown out of Atlantic city’s casino for urinating in a trash can. In 2005, Iverson’s bodyguard was accused of assaulting a man in D.C. nightclub, because he refused to leave the VIP section.

Iverson married his girlfriend from high school in 2001. The couple has five children. In 2010, his wife filed for divorce asking for full custody, child support, and alimony payments.

In 2016, Allen Iverson was added to the NBA Hall of Fame. He has been NBA’s scoring champion for four times. He was elected NBA All-Star eleven times and won the All-Star game MVP award two times. In 2015, there were rumors that Iverson is broke. Iverson has not declared bankruptcy and is denying all rumors.