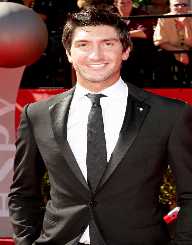 Evan Lysacek was born 4th June 1985 to Don and Tanya Lysacek. He was born in Chicago, Illinois, in the United States. His father is a building contractor; his mother is a teacher. Evan Lysacek has two sisters – one older, and one younger.

Evan Lysacek studied at Neugua Valley High School and graduated in 2003. During his time at high school, Evan Lysacek was a member of the honor roll. He received several academic awards, including the Presidential Award for Academic Excellence in 1999.

The same year he graduated from high school, Evan Lysacek moved to Los Angeles. He started to study acting, but during this period he was also skating. Evan Lysacek had started skating as a youngster at the age of eight. His mother enrolled Evan Lysacek, along with his sister, in figure-skating classes. It wasn’t too long before he was competing. Between 1996 and 1999 Evan Lysacek had started winning national titles, and he made his international debut for the 1999-2000 season when he began to compete on the ISU Junior Grand Prix circuit.

Evan Lysacek moved into the seniors in 2004, and in 2005 he came third in the U.S. Championships but went on to win his first international title in the senior ranks at the 2005 Four Continents. Evan Lysacek continued to perform well in competition, and he was named in the 2006 Winter Olympic team for the U.S. Although falling ill during the games, Evan Lysacek still came in a very respectable fourth overall. Although Evan Lysacek skated very well during the 2006-2007 season, he had to withdraw at one stage due to injury. A few weeks later he won his first national title at the 200

Although he didn’t announce his retirement, Evan Lysacek didn’t compete during the 2010-2011 season. During this period, he was also negotiating an agreement with U.S. Figure Skating. An agreement was finally reached in August 2012, but Lysacek then had to withdraw to have surgery on a torn muscle. Evan Lysacek was never to return to competition after the surgery, despite several attempts. His retirement was announced in August 2014.

When he won the 2009 World Figure Skating Championships, Evan Lysacek had sponsors lining up to be associated with him. Some of the names included Ralph Lauren, Coca-Cola, and AT&T. His costume designers included Christian Dior and Vera Wang. In 2014 he moved to New York City to start a career in real estate. In 2015, however, he began working for the designer, Vera Wang.

Evan Lysacek has won many skating titles. Some of his other awards include:

He has supported the Elizabeth Glaser Pediatric AIDS Foundation, and the Dana-Farber Cancer Institute. He is also a board member of the Figure Skating in Harlem charity.