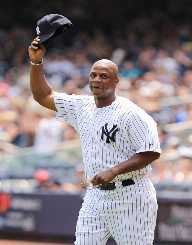 Darryl Eugene Strawberry was born on the 12 March 12, 1962, in Los Angeles to Ruby and Henry Strawberry. His father was a postal worker and his mother a secretary.

In 1980 was the number one draft pick of the season and Darryl Eugene Strawberry was selected by the New York Mets. Initially, he played in the Minors and 1983 he was elevated to the Majors. Strawberry was elected Player of the Year in his first season, and the New York Mets won the 1986 World Series Championship. In 1990 he signed with the Los Angeles Dodgers. He spent three years in LA but because of personal problems, his career was suffering, and he was traded to the San Francisco Giants.

Strawberry went through a challenging period when due to his drug problem, he was no longer playing, and at the same time, his mother died. He entered rehab and was playing in the independent league when the New York Yankees when George Steinbrenner (the principal owner of the Yankees) decided that Strawberry needed another chance. Steinbrenner offered Strawberry the opportunity to return to the Yankees. He was playing for the Yankees when they won the 1996 and the 1998 World Series Championships. Around this time Strawberry was diagnosed with colon cancer. After six months of cancer treatment, he was fit to play with the Yankees in the World Series Championship in October 1999, when they beat that Atlanta Braves 4-0.

Darryl Eugene Strawberry married Lisa Andrews in 1985, and they divorced in 1993. He then married Charisse in 1993, and they had three children together: Jordan, Jade, and Jewel. The couple co-wrote a book, Recovering Life which was published in 1999.

In April 1999 Strawberry was arrested for possession of cocaine and soliciting. The Major League Baseball suspended him for twenty weeks, and after a no plea deal, he was sentenced to community services and twenty-one months probation. Strawberry was arrested in September 2000 for driving while on painkillers. He had been attempting to see his probation officer when he had an accident and then tried to flee the scene. He was arrested and put under twenty-four months house arrest and was subsequently given community service and twelve months probation. Strawberry was in trouble with the law in October 2000 when he broke his house arrest and parole order and was jailed. Strawberry was suffering from depression at the time and had one or two more run-ins with the law before he was instructed to attend a drug treatment programme. Strawberry had further problems at the treatment center and after breaking his probation was jailed in March 2002. He spent eleven months in jail.

After going into a drug recovery programme, Strawberry met Tracy Boulware who was a recovering drug addict and also a born-again Christian. They became friends and later, in 2006, they got married, the same year he became an ordained minister.

Darryl Eugene Strawberry was treated for colon cancer in 1998 and in 2000 required surgery to remove a tumor close to one of his kidneys.

Strawberry has been open with his battle against depression. He appeared in a documentary where he discussed it to helping others in the same situation.

Between 2005 and 2008, Darryl Eugene Strawberry worked for the New York Mets, and he attended the 1986 World Champion twenty year reunion in August 2006. In 2010, he was inducted into the Mets Hall of Fame. The same year he appeared as a contestant on The Apprentice.

In his first media interview since starting his ministry in 2010, Strawberry told Bob Nightengale of the Washington Post that although he still loved the game, his role and history in it is not something focus on any longer. He lives quietly with his wife Tracy near St Louis, Missouri and devotes his time to preaching and practicing his ministry.

Between 2010 and 2012 Strawberry owned a restaurant the Sports Grill in Douglaston and he was often a regular at it. The restaurant also hosted a 1985 Mets reunion.