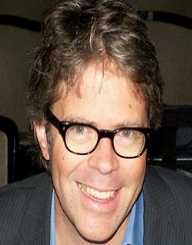 American author Jonathan Earl Franzen was born on the 17 August 1959 in Western Springs, Illinois to Earl Franzen and Irene Super.

Jonathan Franzen obtained a degree from Swarthmore College (1981) majoring in German. After winning a Fullbright Scholarship, he studied at  Freie Universität Berlin in Germany (1981-1982).

After returning from his studies in Germany,  Jonathan Franzen obtained a position as a research assistant at Harvard University. His first novel Twenty-Seventh City (1988) was published by Farrar Straus & Giroux, and the success of the book established him as an American writer of note.

Twenty-Seventh City was followed by Strong Motion (1992) but did not sell as well as his first novel. The Corrections (2001) his third novel was a success and won various prizes including a National Book Award. Freedom (2010) was also a success. Freedom was published in 2010 and Purity 2015, both by Farrar, Straus, and Giroux.

Throughout his writing career, Jonathan Franzen has won many awards. These awards include the Whiting Award (1988), the Berlin Prize (2000),  the National Book Award: Fiction for The Corrections (2001), the James Tait Black Memorial Prize: Fiction for The Corrections (2002), the Galaxy National Book Awards: International Author of the Year for Freedom (2010), the Welt-Literaturpries (2013) and the Frank Schirrmacher Pries (2017).

After The Corrections was included in Oprah Winfrey’s book club, Jonathan Franzen caused a sensation when he publicly disparaged Winfrey's literary taste and questioned the need to have his high-art literary publication on the list.

Winfrey responded by leaving the selection but withdrawing an invitation for him to appear on her show. The literary world took Winfrey's side, seeing Franzen’s comments as ungrateful and arrogant.