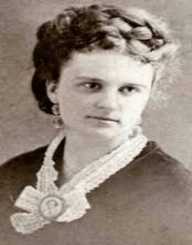 Kate Chopin was an American author who wrote short stories and novels.

Katherine O’Flaherty was born in the city of St. Louis, Missouri, on February 8, 1850. Her father, Thomas, was a wealthy businessman and Irish immigrant. Her mother, Eliza, came from a wealthy family of French descent. She had two sisters and two half-brothers from her father’s first marriage. At the age of 20, she took the last name Chopin from her husband.

Kate Chopin began writing in the 1890s as a way to cope with the tragedies in her life. Her first novel was called At Fault. It did not achieve any recognition. She soon started writing short stories, such as “A Pair of Silk Stockings,” “At the Cadian Ball,” and many others. They achieved some success.

They were published in different magazines and newspapers, including the St. Louis Post-Dispatch. They were gathered up in two collections – Bayou Folk and A Night in Acadie.

In 1899, Kate Chopin published a novel called The Awakening. It told the story of a woman who wanted to leave her duties as a mother and wife and to have a carefree affair with a man she just met.

At the time, the book stirred a lot of controversy because of the inappropriate female behavior it depicted. Decades later, it became important literature for the feminist movement.

Most of Chopin’s work revolved around similar themes. She often talked about the constraints society put on women and their desire for freedom and identity.

She also often explored the difficulties of African-Americans and biracial people, as well as interracial relationships. Her fiction was always set in the American South. She was inspired by Southern folktales and by the mentality of the society there. She was also influenced by the French writer Guy de Maupassant.

In 1970, Kate Chopin married Oscar Chopin, the owner of a cotton plantation. She moved with him to New Orleans, Louisiana. They had six children – Jean, Oscar, George, Frederick, Felix, and Leila. He passed away in 1882. She moved back to St. Louis with her children.

Kate Chopin suffered a brain bleed and died on August 22, 1904. She was buried at the Calvary Cemetery in St. Louis.

Decades after her death, Chopin’s house Cloutierville, Louisiana, became a National Historic Landmark. Unfortunately, it burned down in a fire in 2008. In 1990, she got a star on the St. Louis Walk of Fame. In 2012, a bust of her head was built in her city.