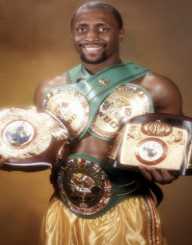 Thomas Hearns was born on October 18, 1958, in Grand Junction, Tennessee. He was the youngest ion the family of three. His mother remarried and he became the third born of the nine children. Hearns grew up in Tennessee. At the age of five, he moved with his family to Detroit Michigan.

He embraced boxing as a young child. He posted an ambitious profile in his amateur career. He fought 165 matches in his amateur years. Hearns won 155 bouts and lost 8. He won his first title in 1977 at the National Amateur Athletic Union tournament. Hearns won the Light Welterweight Championship in Ohio. Later in the year, he won another title. He won the Light Welterweight division at the National Golden Gloves competition. Hearns set his eyes on turning professional.

In 1977, Hearns turned professional under trainer Emmanuel Stewart. Hearns became the most feared hard hitting professional puncher in the ring. On November 25, 1977, Hearns won his first professional fight against Jerome Hill in Michigan. He posted an impressive winning record of 25 straight wins. He went into the ring to fight against Angel Espada from Puerto Rico. At stake was the vacant USBA Welterweight title. On March 2, 1980, Hearns got his first professional title after beating his opponent with an impressive technical knockout in the fourth round.

On August 2, 1980, he stepped into the ring to fight against the Mexican boxer Pipino Cuevas. He won the match with a second-round knockout. Hearns took the WBA Welterweight title from Cuevas after being champion for four years. He defended the WBA title thrice before meeting Sugar Ray Leonard.

Hearns fought two mercurial matches in his career. He fought Sugar Ray Leonard in 1981 and Marvin Hagler in 1985. Boxing historians point out the two as part of the best matches in boxing history. On September 16, 1981, Hearns stepped into the ring to face Leonard in a WBA/WBC Welterweight titles unification match. Hearns came into the match with 32 straight wins without a loss in his professional career. Leonard had a 32 to 1 record. Hearns suffered a knockout in the 14 round. Leonard became the unified champion. In June 1989, the two boxers met in a rematch. The fight ended in a draw.

In December 1982, Hearns moved to the WBC Super Welterweight division. He defeated the champion Wilfred Benitez from Puerto Rico with a majority decision. He defended the title against several boxers including the Panamanian Roberto Duran in 1984. Hearns became the first boxer in history to beat Duran with a knockout. Hearns earned the Fighter of the Year Award from the Ring Magazine for the second time in 1984.

Hearns scaled to the middleweight division to challenge the reigning champion, Marvin Hagler. On April 15, 1985, they fought in Nevada in a match dubbed The Fight. Hearns outpunched Hagler in the first and second round before breaking his hand. Hagler capitalized on the handicap to hand Hearns his second knock out of his career. Hearns never got a rematch. He won the NABF title against James Schuler in March 1986. Hearns won the WBC Light Heavyweight title against the British fighter Dennis Andries in March 1987. He stopped Juan Roldan in October 1987 with a fourth-round knockout to win the WBC Middleweight title.

In June 1988, Hearns lost to the unknown Iran Barkley. Hearns lost the WBC Middleweight to the unknown fighter in the 1988 Upset of the Year bout by The Ring Magazine. Hearns stepped back into the ring in November 1988. He fought and won against James Kinchen to become the inaugural WBO Super Middleweight champion. With the win, Hearns became the first professional boxer to win five world titles in five different weight categories.

In his career, Hearns posted an unmatched record of 67 fights. He won 61 wins, lost 5 and 1 draw against Leonard. He delivered 48 knockouts against 4.Hearns earned the nicknames The Hitman, and Motor city cobra for his hard-hitting punches and ferocious aggressiveness in speed and accuracy.

In a bizarre challenge, Hearns appeared on the WWE and attacked professional wrestler Jim Neidhart on June 23, 1997. Hearns responded to a daring challenge by Neidhart’s partner Bret Hart, Hart alleged that Hearns stole the nickname Hitman from Bret Hart. The awaited battle of the Hitman’s never materialized.

Hearns lives in Detroit Michigan. He is married to his wife Rena and has four children. He is a police reservist in the Detroit Police Department. His family is immersed in the boxing world. His son Ronald followed his father into boxing. Hearn’s mother, Lois operates the Hearns Entertainment. She promotes sporting events in Detroit and the Michigan state. In 2000, she promoted the Tyson versus Golota fight.

Still a living legend, Thomas Hearns has cemented his name in the annals of boxing and sports history. He won world titles in the Welter, Light Middle, Middle, Super Middle, and Light Heavyweight divisions. Years later after he retired, few boxers have tried to emulate his record in the ring.