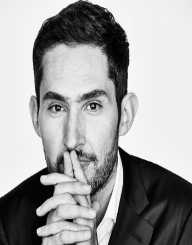 Kevin Systrom is an American entrepreneur and software engineer born on 30th of December, 1983 in the beautiful town of Holliston in Massachusetts to Diane and Douglas Systrom

Kevin Systrom started his educational career at Middlesex School in Concord, Massachusetts where his love for computer programming was ignited; he, later on, moved to the Standford University where he bagged a degree in Management science and engineering in 2006. At Stanford University, he was a member of the Sigma Nu fraternity- a social organization whose mission is to develop ethical leaders, to foster personal growth and also to perpetuate friendships and commitment to the fraternity.

Due to his exceptional brilliance, Kevin Systrom was among the twelve students that participated in the Mayfield Fellows Program at Standford University who also led to his internship at Odeo; the company that gave rise to the famous social medium, Twitter.

After his graduation from the University, Kevin Systrom got employed at the famous internet service and technology giant ‘Google’ as an associate product marketing manager whose duties entailed working on Gmail, Google Calendar, Docs, Spreadsheets and other products.

Kevin Systrom left Google after rendering his service to them for two years. He went ahead to form a new venture called “Next Stop” alongside some persons like Adrian Graham, Charles Lin and Carl Sjogreen who had worked at Google.

On the 25th of September, 2010, ‘Nextstop; a start-up which was developed to recommend destinations to people and help them in exploring places was overtaken by the popular social network, ‘Facebook.'

Due to the spontaneous act of Kevin Systrom, he birthed the idea that location check-ins can be merged with prevalent social games. He prepared a prototype and shared the idea with Baseline Ventures and Andreessen Horowitz at a party. The duo bought into the idea and made a seed funding of $500,000.

The ‘Burbn’ was built by Kevin Systrom and Mike Krieger in the city of San Francisco. It contained an HTML 5 check-in service which enabled users to check in locations, make plans, earns points from hanging out with friends, post pictures and lot more. However, after much consideration from both programmers, they decided Burbn was a complicated product that contained too many features. They decided to focus on a specific feature which was photo-sharing, this development led to the birth of the top photo-sharing platform, Instagram.

Instagram derives its name from the words “instant” and “telegramming.” The social network within a month of its launch had about one million users and currently now can boost of 600 million active users. Instagram was sold for $1billion in cash and stock with thirteen employees to Facebook in April 2012

The sale earned Kevin $400 million based on his ownership stake in the business. Although it was sold, Kevin Systrom remains the CEO while Krieger acts in the capacity of the technical head of the company. He still has a major say in the operations and functioning of the photo-sharing platform.

Kevin’s impact has been felt and appreciated. In the year 2012, Kevin Systrom was awarded the “Founder of the Year” at the ‘6th Annual Crunchies Awards’, he also shared the “Webby Breakout Award’ with the co-founder of Instagram.

In 2013, Kevin Systrom was listed in Forbes 30 under 30 list under the Social/Mobile category.

He was also the recipient of the ‘CFDA Social Media Award’ in 2015. Kevin’s love for photography, inspired by his mother, took him to the list of billionaires with a net worth of $1.1 billion.

Kevin Systrom got married to his high school sweetheart, Nicole Schuetz; CEO of Sutro a clean-energy investment firm on October 31, 2016, in Napa, California.