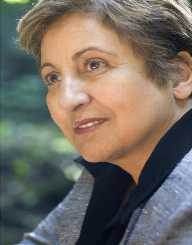 Shirin Ebadi is an Iranian human right activist, lawyer, and a formal judge. Born on June 21, 1947, he is the founder of Defender of Human Rights Centre in Iran. Shirin Ebadi received the Nobel Peace Prize on October 10, 2003, for her “significant and pioneering efforts for democracy and human rights, especially women, children and refugee right.” Ebadi’s award created mixed feelings in her country, as her supporters gave her a rousing welcome at the airport, the conservative media downplayed it while Mohammad Khatami, the then Iranian President saw it as political.

Foreign Minister Jonas Gahr Stoere, in a statement published in 2009 alleged that the Iranian authorities have seized Ebadi's Nobel Peace Prize, stating that that "This [was] the first time a Nobel Peace Prize ha[d] been confiscated by national authorities." The claim was denied by Iran. She left into exile in the UK in June 2009 due to the persecutions of Iranians who were critical of the regime.

After his doctoral studies, Shirin Ebadi was appointed to the Tehran city in 1975, court becoming the first woman president of thecourt. Shirin Ebadi was also the first woman judge of Iran. She remained in that position until 1979 after the Iranian revolution when Shirin Ebadi was demoted to the secretarial position of the court. The moved was initiated by the conservative clerics who insisted Islam prohibits women from becoming judges. Other female judges joinedShirin Ebadi to protest the decision and were given the position of legal expert. Unsatisfied with the outcome, Shirin Ebadi sought for early retirement, which was repeatedly rejected. Shirin Ebadi, however, quitted, but could not even practice law until 1993. During that free period, she authored several books and articles.

Ebadi As A Lawyer

Shirin Ebadi practiced law and at the same time lectured at the University of Tehran in 2004. As a new practitioner, she campaigned for became an advocate for the strengthening of the legal status of children and women. Shirin Ebadi worked on pro bono for persons who had fallen foul of the judiciary especially those seen as dissidents. One of such cases was representing the family of, the dissident, Dariush Forouhar, an intellectual and politician who was found stabbed to death in his home and his wife, Parvaneh Eskandari also being killed. Their death caused panic among the intellectual communities in Iran, and this was blamed in extremist hard-liners who wanted to put a stop to the more liberal and free speech championed by the then President Khatami.

Shirin Ebadi was also a representative of the family of Ezzat Ebrahim-Nejad, killed during the Iranian student protest in July 1999. During the proceedings in 2000, she was accused of manipulating a video recording of the confession of Amir Farshad Ebrahimi, a member of the Ansar-e Hezbollah. In the tape, Ebrahimi confessed his involvement in the killing and other attacks made on members of President Khatami cabinet on the orders of high-level conservative authorities. However, Shirin Ebadi defended the act claiming she videotaped the confession for court hearings.

Shirin Ebadi was found guilty and sentenced to five years in jail along with Rohani for sending the tape to President Khatami and the head of the Islamic judiciary. Her law license was also seized. Their sentence was later quashed by the Islamic judiciary supreme court. However, Ebrahimi was sentenced to 48 months in prison with 16 months in solitary conferment. Aside from her work for political victims, Shirin Ebadi also worked in the field and child and women’s rights by defending several various child abuse cases among several others. With funding from the West, Shirin Ebadi founded two NGOs in Iran namely Society for Protecting the Rights of the Child (SPRC) in 1994 and the Defender of Human Rights Centre in 2001.

Shirin Ebadi received the Nobel Peace Prize in on October 10, 2003, for her efforts for democracy and human rights, especially for the rights of women and children. Shirin Ebadi was praised by the selection committee for being a "courageous person" who devoid of all odds "has never heeded the threat to her own safety".

Her award was seen as political as many observers saw Pope John Paul rather fit for it that year. They claimed Ebadi’s activities were not in line with the main purpose of the award as stipulated by Alfred Nobel. There was also criticism from the Iranian authorities who termed her award as being a political act by a pro-western organization. They were also critical of the fact that Shirin Ebadi did not cover her hair as a Muslim while receiving the award. Nonetheless, Shirin Ebadi also received some support from the country.

In November 2009, Shirin Ebadi claimed that the Revolutionary Court had taken her Nobel Peace Prize Medal, Legion d’honneur, a ring received from the Germany association of journalists and a diploma from her bank box. That aside, Shirin Ebadi said her bank account has also been frozen by the government. The incident was expressed as shocking by the Norwegian Minister of Foreign Affairs, Jonas Gahr Store. However, the Iranian foreign ministry denied the claims and criticised Norway for meddling in the internal affairs of Iran.

Shirin Ebadi sued the United States Department of Treasury in 2004 for the restriction she faced while publishing her memoir in that country. This happened because the American trade laws also included the prohibitions on writers from embargoed countries and banned her American literary agent Wendy Strothman from working with her. Shirin Ebadi after a long legal battle won the case and was able to publish the memoir in the country.

Shirin Ebadi was married to Javad Tavassolian, who was an advisor to President Khatami.

Shirin Ebadi received several awards and honors including the Nobel Peace Prize in 2003, a plate from the Human Right Watch, Rafto Prize on Human Right, International Democracy Award and James Parks Morton Interfaith Award from the Interfaith Centre of New York among others. Shirin Ebadi also received several honorary degrees from universities like University of Toronto, Simon Fraser University, University of San Francisco and Brown University among several others.