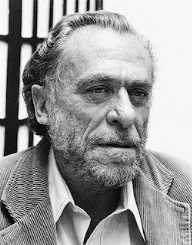 Henry Chares Bukowski was born on August 16, 1920, in Andernach, Germany. His parents were German-American Heinrich Bukowski and Katharina. His father served in the United States army and remained in Germany after his service ended. After the end of the war, Bukowski’s father worked as a building contractor but was not able to provide for his family. In 1923, he decided to move his family to the United States and settled in Baltimore, Maryland.
In 1930, the family moved to Los Angeles, where his father and grandfather had previously lived. Bukowski had a strong German accent and was often bullied by his classmates. His father was often out of a job and became increasingly abusive both emotionally and physically towards his son.

Bukowski attended the Los Angeles High School and later went to Los Angeles City College, where he took classes in art, journalism, and literature. At the start of World War II, Bukowski quit the college and moved to New York. As many German-Americans, Bukowski was suspected of disloyalty. In 1944, he was arrested on suspicion of draft evasion. After failing a psychological examination, he was declared unfit for military service.

Bukowski’s first publishing was his short story Aftermath of a Lengthy Rejection Slip. Bukowski was at the time 23 years old. His next publication was in 1945, named 20 Tanks from Kasseldown, which was published in the Black Sun Press issued of Portfolio: An Intercontinental Quarterly. His work failed to gain major recognition, and he continued to work in several jobs in Los Angeles. In the 1950s, Bukowski worked as a letter carrier with the United States Postal Service.

In 1955, Bukowski’s life took a turn, when he suffered through a near-fatal bleeding ulcer. During his stay at the hospital, Bukowski began to write poetry. The same year, he married poet Barbara Frye but divorced her in 1958. In 1959, two of his poems were published in the literary magazine Nomad, and in the following year, one of his best-known essays Manifesto: A Call for Our Own Critics was published.

In 1960, Bukowski returned to his work at the post office and worked as a letter filing clerk. In 1964, he and his longtime girlfriend Frances Smith had a daughter, Marina Louise. Bukowski’s first separate publication was published by E.V. Griffith titled “His Wife, The Painter.” Later that year, his first book of poems “Flower, First and Bestial Wail” was published. The Hearse Press continued to publish Bukowski’s work throughout the next three decades. In 1967, Bukowski began to write the column “Notes of a Dirty Old Man” for Los Angeles newspaper Open City. The column was picked up by Los Angeles Free Press in 1969.

In 1969, Bukowski quit his post office job and began working for the Black Sparrow Press. The following year, he finished his novel Post Office. Bukowski continued to release his works with Black Sparrow Press, which became a highly successful enterprise.

Bukowski often had love affairs and one-night trysts. One of his romantic encounters was with the poet and sculptress Linda King, and he was seen in her play Only a Tenant. Bukowski wrote a book “Scarlet,” released in 1976 as a tribute to one of his girlfriends. In 1976, he met Linda Lee Beighle, a restaurant owner, and aspiring actress. They continued to live together over the next two years and were eventually married. Beighle was featured as Sara in Bukowski’s novels Women and Hollywood.