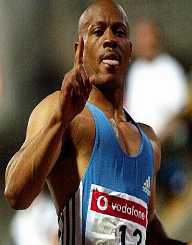 Maurice Green was born in July 23, 1974. He is an American former track and field sprinter. He is distinguished for his 100 and 200m races. He has won many medals during his career.

Maurice Green was born on July 23, 1974, in Kansas, United States of America. He was brought up alongside three siblings, Michael, Ernest, and Kelly. He attended F. L Schlagle High School in Kansas. He played football as well as field events while at school. He later got a scholarship to study at the University of Kansas.

He began his career in 1995 where he reached quarterfinals in the 100m at the IAAF World Championships in Athletics held in Sweden. In 1996, he was unable to make the American team for the Summer Olympics in Atlanta. Maurice later joined the Hudson Smith International where he became a prominent athlete under the coaching of John Walton Smith. Smith is a former UCLA coach. In 1997, he won the 100m gold medal at the World Championships, Athens in Greece.  The following year he won a gold medal in the 100 and 4*100m at the Goodwill games that were held in New York. In 1999, he won the gold medal in the 60m sprint at the Seventh IAAF World Indoor Championships at Japan.

In 2004, he won a bronze medal in the 100m race at the 2004 Summer Olympic Games held in Athens. Maurice also won a silver medal in the men’s 4*100m relay. In 2006, he appeared in the reality game show ‘Identity.’ In 2008, while in Beijing he announced his retirement from track and field because of injuries. He later appeared in shows such as ‘Dancing with the Stars’ and ‘Blind Date.’ Currently, he is a host in the show ‘Greene Light’ that is shown on Eurosport.

His private life is not much in the public. Maurice, however, has a daughter called Ryan Alexandria. He is currently dating Claudia Jordan. Claudia is an American actress, reality and television personality, and model. He is currently forty three years old. He has a net worth of $3 million.