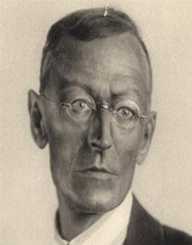 Hermann Karl Hesse was a German novelist, poet, and painter. Born on July 2, 1877, he won the Nobel Prize for Literature in 1946. Hesse explored the theme of an individual seeking to break out from the norm to acquire self-knowledge, unique identity, and spirituality. His best works include The Glass Bead Game, Demian, Siddhartha, and Steppenwolf.

Hermann Karl Hesse was born on July 2, 1877, in the Calw, Wurttemberg in the then German Empire. He was born to Marie Gundert and Johannes Hesse. His maternal grandfather Hermann Gundert contributed to translating the Bible to Malayalam, compiled the current grammar in Malayalam language and the Malayalam to English dictionary. Hesse was a willful child and proved very difficult to be controlled.

At the age of four, the family moved to Basel, Switzerland where they stayed for six years before returning to Calw. His favorite spot in Calw was the St. Nicholas-Bridge (Nikolausbrücke).

Hermann Hesse's grandfather encouraged him to read widely and gave him access to his library. He attended the Latin School in Goppingen and at the behest of his father, enrolled at the Evangelical Theological Seminary of Maulbronn Abbey in 1891. He found it difficult adapting to the conditions at the seminary and decided to drop out. This contributed to a personal crisis, had grudges with his parents and attempted suicide in May 1892.

Hermann Hesse was confined in a mental institution in Stetten im Remstal for some time, upon his discharge, he attended the Gymnasium in Cannstatt and passed his One Year Examination in 1893.

After leaving school, Hermann Hesse apprenticed at a clock tower factory and later with a bookseller, Tubingen from Octobers 1895. His work at the bookshop afforded him the opportunity to read even wider.

He read theological works, Greek mythology, German Romantics, and works of Johann Goethe, Gotthold Lessing Clemens Brentano, and Friedrich Schiller. He, therefore, decided to be a poet. With sustainable income, he became financially independent of his parents by 1898.

Hermann Hesse wrote the poem Madonna, which appeared in a Viennese periodical in 1896. The following year, he released his debut poetry, Romantic Songs and followed it with the collection of prose, One Hour After Midnight, 1898, published by Eugen Diederichs. The two works were a commercial flop with just a few copies sold.

This failure of the works and his mother’s disapproval of Romantic Songs sent Hesse into a great shock. In 1901, his work Posthumous Writing and Poems of Hermann Lauscher, published by Samuel Fischer earned critical acclaims, and that was the beginning of his success in the literary field. Hesse followed this success with his debut novel, Peter Camenzind.

Hermann Hesse's second novel Beneath the Wheel was published in 1906, followed by the short stories The Wolf. He released the novels Gertrud, 1910 and Rosshalde in 1914. He embarked on a journey to India, which resulted in the poetic novel Siddhartha in 1922, set in the time of the Buddha and about the search for enlightenment. Hesse suffered life crises after the death of his father in 1916, and the ill health of his son Martin and wife’s schizophrenia. These effects sent him into psychotherapy, where he met Carl Jung.

His experience there appears in the novel Damian, 1919, which analyses the achievement of self-awareness by a distressed adolescent. The novel gained him popularity among young Germans. Hesse continued to explore themes of an individual seeking to achieve personal spiritual fulfilments and self-realization.

This theme manifested in works like Der Steppenwolf, 1927, Narziss und Goldmund, (Narcissus and Goldmund) 1930, and Das Glasperlenspiel (The Glass Bead Game or Magister Ludi) in 1943. In 1946, he received the Nobel Prize in Literature.

Hermann Hesse married Maria Bernoulli in 1904. The couple lived in Gaienhofen on Lake Constance where they had three sons. During this period, his interest in Buddhism rejuvenated after reading a work by Arthur Schopenhauer and discovering Theosophy.

The marriage faced several crises and ultimately ended in divorce. His second marriage was to singer Ruth Wenger, but just like his first marriage, it saw no progress. Hesse died on August 9, 1962, at age 85. He was interred at San Abbondio in Montagnola.