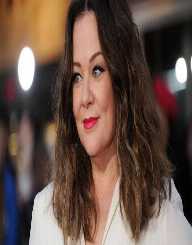 Melissa McCarthy is an American actress who proves that acting is not all about looks, but about the ability to resonate with the audience. Despite her plus-size figure, she has enjoyed huge popularity among viewers, with roles like Sookie St. James in the Gilmore Girls. As of 2017, she is one of the most highly paid actresses in Hollywood.

Melissa McCarthy was born on August 26, 1970 in Plainfield, Illinois. Her parents Sandra and Michael McCarthy were Irish farmers. She attended the St. Francis Academy in Joliet, Illinois. But dreaming of a career in the acting industry, she moved to Los Angeles in 1990.

Melissa McCarthy is not like a typical Hollywood actress with a slim figure. Instead, she is the exact opposite of a plus-size body. But due to her exceptional and natural acting, her career graph has steadily increased in Hollywood. From a Standup Comedian in 1990, she has become one of the most sought after actresses in Hollywood.

Melissa McCarthy started as a standup comedian at famous clubs like the Improv. Her performances were praised by the crowd. Motivated by her success, she decided to target a larger audience and moved to Hollywood.

She was spotted by a member of the Groundlings, and McCarthy became a member. As a Groundling, she wrote and acted her part with other members on several stage performances. During this time, she landed supporting roles in movies like The Kid, Go and Charlie’s Angels.

In 2000, McCarthy earned a role as Sookie St. James in the Gilmore Girls. Her performance as a witty chef earned her critical praise and recognition. The show reached its finale in 2007, and McCarthy was associated with it for eight years.

She made recurring and guest appearances in other shows for two years, and in 2010, she was cast in Mike and Molly. This role earned here an Emmy Award.

McCarthy’s outstanding performances also brought her roles in the mainstream movies. She appeared in films like Spy, St. Vincent, Identity Thief, and Tammy. In 2013, she was cast along with Sandra Bullock in the movie The Heat.

McCarthy appeared in the movie The Boss in 2016. In 2016, she earned $33 million and became the second highest paid actress in the world.

Melissa McCarthy has earned several nominations in her two decades-long careers. This includes an Academy Award Nomination for Best Supporting Actress in which she appeared with fellow Groundling, Kristen Wiig.

She also won the Emmy Award for Outstanding Lead Actress in a Comedy series in 2010.

Melissa McCarthy married her longtime boyfriend, actor Ben Falcone on October 8, 2005. They have two beautiful daughters – Vivian, born on May 5, 2007, and Georgette, born on March 22, 2010. The couple has appeared together in the film Bridesmaids, which earned her an Academy Award nomination.