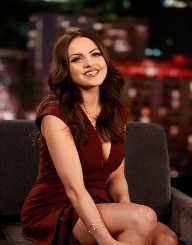 Elizabeth Gillies an American actress born on July 26, 1993, in Haworth, New Jersey. Her parents are David and Lorrie Gillies, and she has one sibling, a brother George.  The Gillies family ancestry is Irish, English, Scottish and Italian.

Elizabeth Gillies started acting and attending auditions when she was twelve. She began appearing in various television commercials including one for Virgin Mobile. As well as acting, she is a dancer, singer, and songwriter.

Gillies appeared in some theatrical productions before making her first appearance on Broadway, as Lucy in 13.  She was fifteen at the time. The production was the first on Broadway to have a cast of teenagers.

Musically Gillies has recorded covers of rock classics such as Wild Horses, Fast Car and Jealous Guy. She sang various duets with two of her costars on Victorious series.

Television appearances include The Black Donnellys (2007), the voice over of Daphne in Winx Club (2004).  In 2009, she appeared in White Collar and Big Tim Rush.

Elizabeth Gillies breakthrough role came in 2010 when she was offered the position of Jade West role in the hit Nickelodeon series, Victorious. The sitcom was set in a Hollywood high school and followed the lives of a group of teenagers. As well as acting in Victorious, Gillies sang on the soundtracks of Victorious and later on Victorious 2 sang a debut with fellow cast Ariana Grande (Give It Up) and another duet with Victoria Justice (Take a Hint).

Since the sitcom came to an end in 2013, Gillies has been busy with some projects.

Gillies appeared in White Collar and The Exes. She was given a role in the musical Jawbreaker, playing Courtney but the show did not make it to Broadway. She appeared in the film Animal (2014), Killing Daddy and Lifetime. Gillies was performed Heather on Vacation (2015) and then acted in a comedy series Sex&Drugs&Rock&Roll, playing a singer; the daughter of a faded rock star.

Elizabeth Gillies is close to her family. She is known as Liz within her family group. Her ex-partner is Logan Miller.

Elizabeth Gillies suffers from an allergic reaction to many foods and eats a mostly vegan diet to help with this condition.