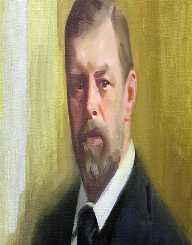 Born on November 8, 1847, Abraham Stoker best known as Bram Stoker was an Irish author. Aside from his writing career, he was a business manager of the Lyceum Theatre in London and the personal assistant to actor Henry Irving. As an author, he was famous for his Gothic novel, Dracula in 1897.

Abraham Stoker was born on November 8, 1847, in Clontarf, Dublin, in Republic of Ireland to Abraham Stoker and Mathilda Blake Thornley. Born into a religious family, he was the third son of seven siblings by his parents. As a child, Abraham Stoker had an unknown illness which caused him to be bedridden until age seven. He started his education at a private school run by Reverend William Woods.

Abraham Stoker continued his education at the Trinity College, Dublin in 1864. While there, he was involved in athletics and also became the auditor of the Hist, the College Historical Society. Stoker was also the president of the University Philosophical Society. He graduated in 1870 with a B.A in Mathematics with honors.

Abraham Stoker began a career as a theatre critic and author after graduating from school. His interest in theatre was informed by his friendship withDrMaunsell who was himself a lover of theatre. As this time, he worked for Dublin Evening Mail. He became friends with actor Henry Irving after Abraham Stoker wrote a favorable review about his movie, Hamlet in December 1876. As an author, he wrote The Crystal Cup, which was published by the London Society in 1872.

He then came out with The Chain of Destiny. He wrote his first non-fiction book, The Duties of Clerks of Petty Sessions in Ireland in1876 but was published in 1879. The Same year, his interest in arts led him to establish the Dublin Sketching Club.

After building a strong friendship with Irving, Abraham Stoker was invited to London to become the business manager of Lyceum Theater, which was owned by Irving. He also became his acting manager. Through this job, he met several people, was involved with the high society in London and traveled around the world with Irving. He visited the House White twice where he met President Theodor Roosevelt and William McKinley. Stoker held the post for 27 years.

While working with Irving, Bram Stoker took on to writing and therefore came out with several books including novels, short stories, fiction, and non-fiction. He joined The Daily Telegraph in London as one of the literal staff as he took on writing. He was inspired to come out with what became his most famous, Dracula while on a visit to the English coastal town of Whitby in 1890. In 1890, he came out with the novel, The Snake’s Pass which he followed with Dracula in 1897.

In 1909, Abraham Stoker came out with the fiction novel, The Lady of the Shroud and in 1911 released The Lair of the White Worm. Stoker’s works are today among categories like horror fiction, romanticised Gothic stories, and melodrama according to the Encyclopaedia of World Biography.

Bram Stoker was married to Florence Balcombe in 1878. Florence was the daughter of Lieutenant-Colonel James Balcombe. The couple has a son, Irving Noel Thornley Stoker in born on December 31, 1879. Bram Stoker died on April 20, 1912, to what some suggested as tertiary syphilis and other said it was due to overwork. He has suffered series of strokes prior to his death.

Abraham Stoker wrote several fictions, non-fiction, short stories, and novels during his writing career. Some of his novels include Seven Golden Buttons, 1891, The Watter’s Mou, 1895, The Shoulder of Shasta, 1895, Miss Betty 1898 and The Jewels of Seven Stars in 1903. Under the Sunset which comprised eight tales for children, Snowbound: The Record of a Theatrical Touring Party and Dracula’s were some of his short stories. His only non-fiction book was The Duties of Clerks of Petty Sessions in Ireland in 1879.

Abraham Stoker is celebrated for his works up to date. In honor of his literal works, an annual festival has been initiated at his birthplace in Dublin with support from the Bram Stoker Estate, Dublin City Council and Failte Ireland. During his 165th birthday, which fell on November 8, 2012, he was honored with a Google Doodle on Google’s homepage.