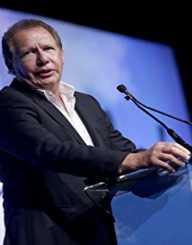 Garry Shandling was an actor, writer, and producer from the United States of America. Born on November 29, 1949, he was also a stand-up comedian and director. He rose to fame with the show It’s Garry Shandling’s Show and The Larry Sanders Shows. Starting a career as a writer, Shandling wrote sitcoms like Sanford and Son and Welcome Back, Kotter.

After a near-fatal accident, he took up a career in stand-up comedy and with an impressive performance on The Tonight Show Starring Johnny Carson; he became a frequent guest-host on the show. Garry Shandling came up with the show It’s Garry Shandling’s Show in 1986 until 1990. Two years later, he created the show The Larry Sanders Show, which aired on HBO. The show was very successful earning 18 Emmy Awards nominations. In 1998, he won the Primetime Emmy Award for Outstanding Writing for Comedy Series.

Garry Shandling also appeared in films including Iron Man 2, Captain America: The Winter Soldier and lent his voice to the character Verne in Over the Hedge.

Garry Shandling was born on November 29, 1949, in Chicago, Illinois to a Jewish family. He was born to Irving Shandling and Muriel Estelle as one of their two sons. His father owned the Shandling Lithographic and his mother a proprietor of Muriel Shandling’s Animal Fair pet shop. Garry Shandling was raised in Tucson, Arizona when the family had moved there to seek treatment for his older brother Barry Philip who was suffering from cystic fibrosis. He died at age 10.

Garry Shandling attended Palo Verde High School and after graduating enrolled at the University of Arizona, where he majored in electrical engineering for three years. He later changed his course to pursue marketing graduating with a degree. He did postgraduate studies in creative writing. At the age of thirteen, Garry Shandling had already obtained a ham radio license. He had the callsigns W7BKG, WN7BKG, and in 1969 held WA7BKG.

Graduating from school, he moved to Los Angeles where he worked for an advertising agency. After taking some classes in script writing, Garry Shandling wrote the script of four episodes of the sitcom Sanford and Son for NBC. He also wrote the scripts for Welcome Back, Kotter.

Garry Shandling made his debut stand-up comedy at the Comedy Store in Los Angeles in 1978. He struggled at the beginning and was not on the regular line-up of performers at the store because the owner Mitzi Shore thought he was not good enough. A talent scout from The Tonight Show Starring Johnny Carson discovered Shandling during one of his performances. He was then booked to appear on the show in 1981. With the wonderful performance, he later became a regular guest host of the show until 1987.

Along with Alan Zweibel, Garry Shandling created the It’s Garry Shandling’s Show in 1985. The show, which was aired on Showtime, ran for 72 episodes until 1990. Fox network showed an edited rerun of the show from 1988. The series gained prominence receiving four Emmy Awards nominations. Garry Shandling won fourCableACE awards, with two from the Best Comedy Series category. Other awards include American Comedy Award for Funniest Male Performance in a Series and Television Critics Association’s Outstanding Achievement in Comedy.

After the successful run of Garry Shandling’s Show, Shandling came up with the multiple award-winning talk show sitcom, The Larry Sanders Show in 1992. Garry Shandling wrote 38 out of the89 episodes of the show, which aired on HBO until 1998. The show received 56 Emmy Awards nominations at the winning three. He personally received 18 Emmy Awards nominations winning one for Outstanding Writing in a Comedy Series. He won a BAFTA Award, eight CableAceAwards and two American Comedy Awards for Funniest Male Performance in a Comedy Series.

During this period, he had an offer of $5 million from NBC in 1993 to replace David Letterman as the host of the Late Night but declined it. He also turned down another offer to host the network’s The Late Late Show.

Acting And Other Works

Aside from writing a comedy, Garry Shandling has made appearances in films including The Night We Never Met, Love Affairs, Mixed Nuts, Dr. Dolittle, What Planet Are You From? And Town & Country. Others include Iron Man, Captain America: The Winter Soldier and The Dictator. Along with David Rensin, he published the Confessions of a Late Night Talk Show Host: The Autobiography of Larry Sanders in October 1999. Garry Shandling has hosted the Grammy Awards four consecutive times from 1990 to 1994. He was the host of the Emmy Awards in 2000 and 2004.

Gary Shandling never married and has no children. He was very secretive about his personal life and ensured all sure matters remained personal. However, he had some relationships including with Linda Doucett sharing the same apartment from 1987 to 1994. He also dated Sharon Stone and Calista Flockhart. He was a basketball enthusiast and played the game usually.

Garry Shandling also loved boxing, had a boxing gym called, TSB 44 (Tough Strong Bold No. 44)and later renamed Wild Card West Boxing Club and boxed four times a week. He was a Buddhist. He died on March 24, 2016, aged 66 in his Los Angeles, California home. He died from a pulmonary embolism. According to a police report from the Los Angeles Police Department, he collapsed home and rushed to a hospital but was unconscious when paramedics arrived.