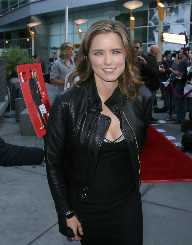 Tea Leoni is a film and television actress famously known for her roles in movies such as, ‘Bad Boys,' ‘Deep Impact’ and ‘Fun with Dick and Jane.' Currently, she plays the lead role in the CBS’ ‘Madam Secretary.'

Tea Leoni is a daughter of parents Anthony Pantaleoni and Emily Patterson born on February 25, 1996, in New York City. Her father was a corporate lawyer while her mother was dietician and nutritionist.

Her parents raised her up in Englewood, New Jersey where she enrolled in Brearley School and The Putney School in Vermont. Later on, she joined Sarah Lawrence College although she did not complete her studies.

Tea Leoni’s career started in 1988 when she starred in the film, ‘Angels 88’ a production which never aired. Later in 1989, she played the character of Lisa DiNapoli in the soap opera, ‘Santa Barbara.’ In 1991, she performed a small comedy role in the film, ‘Switch’ and played in ‘A League of Their Own’ in 1992.

From 1992-1993, she starred alongside Corey Parker in the fox sitcoms, ‘Flying Blind.' Two years later, she appeared in another fox sitcoms film, ‘Cheers’ where she played as the fiancé of Sam Malone and in the ABC/NBC sitcom, ‘Naked Truth’ as Nora Wilde, a show which ran to 1998.

In 1994, Tea Leoni appeared in television shows, ‘The Counterfeit Contessa’ which she played the character of Gina Leonarda Nardino and ‘Wyatt Earp’ as Sally. In 1995, she starred as Julie Mott in the comedy film, ‘Bad Boys’ which sold successfully all over the world.

Later in 1998, she starred in the television movie, ‘Deep Impact,' and produced the film, ‘There’s No Fish Food in Heaven’ which she also played as Landeen. In 2000 Tea Leoni played a lead character alongside Nicolas Cage, in the comedy, ‘The Family Man’ and appeared in the ‘The X-Files’ television show during the episode; ‘Hollywood A.D’, followed by ‘People I Know’ in 2001.

In 2001, she had a lead role as William H. Macy’s wife in the science fiction film, ‘Jurassic Park III.' The performance followed a movie titled, ‘Studio’ and a supporting role in a bomb crime drama, ‘People I know’ in 2002. In 2004, she played the character of Adam Sandler’s wife in a comedy-drama, ‘Spanglish’ followed by her lead role in a comedy film, ‘Fun with Dick and Jane’ in 2005.

Tea Leoni produced and played the character of Laurel Person in a small film, ‘You Kill Me’ in 2007, and ‘The Smell of Success’ as Rosemary Rose in 2009. In 2008, she starred in the comedy-drama, ‘Ghost Town.' Later in 2011, she played a support role in the heist comedy film ‘Tower Heist’ followed by a lead role in the HBO’s comedy pilot ‘Spring/Fall,' a pilot that never aired. Since 2014, she plays the lead role as Elizabeth McCord in CBC political series, ‘Madam Secretary’ that has 68 episodes.

In 1998, Tea Leoni earned two nominations for a Blockbuster Entertainment Awards for her role in ‘Deep Impact’ film. In 2000, she received a Saturn Award for the Best Actress in ‘The Family Man’ film. Notably, Leoni received a nomination for the TV Land Awards in 2006 and an appointment for an Alliance of Women Film Journalists Awards in 2007.

In 2014, she was nominated for the People’s Choice Awards as the favorite Actress in a New TV Series followed by a 2016 CBS MVP Awards nomination for the best motivational speech in the film, ‘Madam Secretary.’

On May 1997, she married actor David Duchovny, after they courted for eight weeks. The couple has two children, Madelaine West Duchovny and Kyd Miller Duchovny. The couple separated on several occasions until Duchovny filed for a divorce in June 2014, that legally ended their marriage in August same year.

Since December 2014, Tea Leoni has dated, Tim Daly, a fellow co-star in the film, ‘Madam Secretary.'

In 2001, she earned the title, UNICEF goodwill ambassador due to her humanitarian work. Her grandmother, Helenka Pantaleoni, is the president of the U.S Fund for UNICEF.