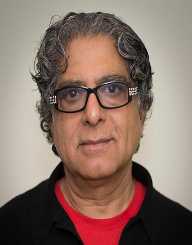 Deepak Chopra is a crown jewel when it comes to healing mind, body, and spirit. Deepak gives credence to affirmation and self-healing. According to his readings, it is an alternative medicine that leads to prosperousness. It is something he has brought into play for over a decade. Other than that, Deepak is a public speaker, writer, journalist, and professional doctor.

It was on October 22, 1946, that Deepak Chopra was born in New Delhi, India. He was born to Pushpa Chopra and Krishan Lal Chopra. His father worked as a cardiologist as well as Lord Mountbatten medical aide. His younger brother, Sanjiv Chopra serves as a physician.

Deepak first joined New Delhi St. Columbus School and later graduated at All India Institute of Medical Sciences. Throughout his teen life, Deepak wanted to know more about human being thoughts and emotions. It wasn’t long that he went to the US to study endocrinology coupled with internal medicine.

After a successful course, he took up an internship at Muhlenberg Hospital in New Jersey. For seven years Chopra worked on different residential posts including at VA Medical Centre which was a profound success.

Over four decades ago, Deepak obtained a certified license from Massachusetts. It wasn’t that long that he opted to major in the branch of physiology (endocrinology). He first showcased his medical skills at Tuffs University, the Harvard and later at Boston University.

In 1980 Chopra worked behind the scene as chief of staff at New England Memorial Hospital. In 1981 with the help and advice from great physician Maharishi Mahesh Yogi, Deepak was asked to major in Ayurvedic practice and meditation.

Deepak resigned from his previous position claiming that doctors prescribe loads of drugs to ill patients. In other words, he considered himself a “drug pusher.”

It first started as a joke when he earned Maharishi Ayur-Veda Products International co-founding name. At some point, he became the director of the Maharishi center located in Massachusetts. He then formulated the slogan “quantum healing” meaning an ill person can be cured by correcting imbalanced hormones. That’s how “quantum mechanism” was born.

Deepak Chopra has taken different initiatives including being frontier of the Mind, and Body Medical Group called Chopra Centre. He is also a pioneer at the American Association of Clinical Endocrinologist as well as at the American College of Physicians.

From 2012 to 2016 Chopra had already equipped himself with brown study thus complete meditation. As a result, he founded a number of foundations including one that promotes alternative health titled Chopra Foundation. Other non-profit foundations include Integrative Studies Historical Archive and Repository plus JUST Capital Company.

With his incredible teachings and direct experience of the divine, he has published over 70 different books. Not to mention contributing as a columnist for “The Washington Post” and ‘San Francisco Chronicle.’

In 2017 he earned World Business Academy Award for his excellent writings.

In 1970 Deepak Chopra got married to Rita Chopra. The couple has two children plus grandchildren. Chopra’s contribution to well-being proved that people could ultimately heal when using alternative medicine. Even then, there are still some critical reactions from doctors; which appear to be an unwritten narrative for another day. For now, understand that this household name isn’t slowing his pace.