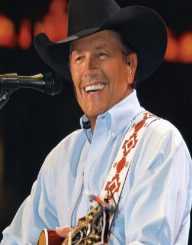 George Strait is one of the few artists who stay true to the traditional country style and tone and make great music. He holds the record for the most platinum and multi-platinum albums by a solo artist.

George Strait was born to John Byron Strait and Doris Strait on May 18, 1952. His birthplace is Poteet, Texas. Strait grew up on a 2000 acre cattle ranch in Bigwells, Texas. George Strait went to the Agriculture South-West Texas University for education.

While in high school, he was drawn to rock music and played in a garage band. Slowly, he got inspired by country songs and drifted to this genre.

After high school, Strait formed his band Ace in the Hole. The band became a major hit locally, and he developed quite a large fan following among the locals.  Still, he struggled to get himself a recording contract from any label.

Strait enlisted himself in the U.S. Army and was stationed in Hawaii. It was there that he played in a band he made with fellow soldiers, Rambling Country.

George Strait s fortunes as a musician turned when he was offered a solo contract under MCA records in 1981. He recorded his first album Strait County that featured the hit single Unwound.

The album was a major hit, and since then he has never looked back. Some of his famous albums include Strait from the Heart (1982), Does Forth Worth Ever Cross Your Mind (1987) and Beyond the Blue Neon (1989).

George Strait tried his luck in the acting world and had moderate success. His debut film Pure Country came out in 1992. He also wrote and sang the songs for the same film. All the songs were received well.

Some popular ones include I cross my Heart, Where the Sidewalk Ends and The King of Broken Hearts.

After a short detour into movies, Strait came back to his musical roots. In 1995, he released a 4-disc boxed set titled, Strait Out of the Box. It became the biggest selling boxed set in country music history.

George Strait followed this success with more albums like Blue Clear Sky (1996) and Carrying Your Love with Me which came out in 1997.

After the death of his daughter, Strait didn’t perform as actively. He released platinum albums though. In 2003, came Hortonville. He also released Somewhere Down in Texas in 2005, and It just comes Natural, in 2006. Both these albums earned him 3 CMA awards.

In 2014, he organized his last tour tilted; The Cowboy Rides Away. Thousands of fans attended the concert.

In 1989, Strait received the Country Music Association’s award for Entertainer of the Year. He received the same honor in 1990. In 2003, he was awarded the National Medal of the Arts. He won another CMA award in 2005, and two more in 2006.

In 2014, he was named Entertainer of the Year again.

After the death of their daughter Jennifer in a tragic car accident, George Strait, and his wife opened a charity foundation named, Jennifer Lynn Strait Foundation.

George Strait married his high school sweetheart Norma Voss on February 23, 1972. They were blessed with two children – a daughter, Jennifer and a son, George Jr. Jennifer lost her life in a tragic car accident.He likes golf and skiing.