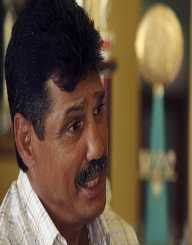 Alexis Argüello was a Nicaraguan professional boxer and politician. Born on April 19, 1952, he was a world champion in three weight divisions including WBA featherweight, WBC super featherweight, and WBC lightweight champion.

Argüello whose boxing career spanned from 1968 to 1995 was a lineal featherweight and Ring magazine champion reigning from 1975 to 1977. The formidable boxer also held the Ring lightweight and the light welterweight titles. Regarded as one of the greatest boxers of his era, Argüello lost none of his world titles in the rings but rather abandoned them in to pursue titles in other higher divisions.

After almost three decades in the ring, Alexis Argüello retired from boxing to pursue a political career. He was elected as the mayor of Managua on November 9, 2008, serving until his death in 2009. Argüello committed suicide by shooting himself in the heart.

Alexis Argüello was born on April 19, 1952, in Managua to a father who was a shoemaker. He had six siblings. He faced several difficulties growing up since he was from a very poor background. To survive the difficulties of his family, left home to work at a dairy farm when he was just nine years. The young Argüello later left for Canada at age 13 to earn a living and to carter for his family back home.

Alexis Argüello was involved in several street brawls growing up, but the thought of becoming a boxer came up after her sister Marina married boxer. He since gained strong interest in the sportstarted an amateur boxing career. As an amateur, he won 58 out of 60 fights.

Trained by former boxer Miguel Angel Rivas, Argüello made a professional debut in the featherweight division on October 26, 1968. He started on a very good note winning his fight three bouts, but the worst was yet to come as he suffered a first-round KO loss and lost the next bout in a split decision. Argüello came back strongly to win 29 out of 30 fights in the next five years.

Argüello successfully defended the title against Venezuelan featherweight champion Leonel Hernández in a technical knockout at the 8th round. He also stopped challenger Rigoberto Riasco at the second round and defeating the undefeated Japanese boxer Royal Kobayashi at the fifth round.

Argüello moved to the super featherweight weight division after successfully defending his featherweight title four times. His first bout in this division was against world junior lightweight champion Alfredo Escalera. Christened The Bloody Battle of Bayamon, the bout took place in Bayamón, Puerto Rico and saw Argüello as the winner.

Argüello successfully defended his title eight times without defeat before abandoning it to move up in weight to the lightweight division. His fight bout was against the lightweight champion Jim Watt in London, which he won by a unanimous decision. This made him one of the sixth boxers to win the world titles in three weight divisions.

He defeated Ray Mancini in round 14 and Andrew Ganigan in the fifth round to defend the title. After defending the title in four bouts, Argüello moved to the super lightweight division with his bid to become a world champion in four divisions. However, he lost the title bout against Aaron Pryor in a fight dubbed

The Battle of the Champions in Miami, Florida. Pryor stopped Argüello at the 14th round in about, which attracted several controversies. A rematch was arranged between the two boxers, and once again, Pryor defeated Argüello, this time at the tenth round. After the fight, Argüello stated, "I'm not going to fight anymore. I quit." He, however, tried a comeback later before retiring from the game in 1995. He all he had a record of 82 wins of which 65 were KO’s and eight losses.

In 1994, Alexis Argüello was elected to the International Boxing Hall of Fame. The Houston Boxing Hall Of Fame also voted him as the Greatest Junior Lightweight Ever in 2014.

After a successful boxing career, Argüello ventured into politics as a member of the Sandinista National Liberation Front (FSLN). He won elections in 2004 to become the vice-mayor of Managua, his hometown.

Four years later, he won the mayoral election to become the mayor of Managua. He narrowly defeated Eduardo Montealegre, the candidate of the Constitutionalist Liberal Party in what was described as a rigged the election.

Alexis Argüello committed suicide on July 1, 2009, by shooting himself through the heart. According to people close to him, Alexis Argüello became wary of the Sandinista government and the Orteguistas rule.