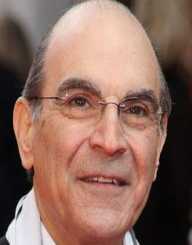 David Suchet (pronounced as Su Chay) is an accomplished English actor renowned for his stage roles and TV appearances. While he is widely known for starring in Agatha Christie’s Hercule Poirot, he has also been credited with several outstanding performances. He developed an interest for theatre at a very tender age, which saw him registering for the National Youth Theatre of Great Britain in way back 60s.

David Suchet was born on May 2, 1946, to Jack Suchet and Actress Joan Patricia in London, UK. Jack, his father, was from a Lithuanian Jewish family that later migrated to South Africa. His maternal grandfather, James Jarche, was from a Russian Jewish family that had settled in England after emigrating through France.  James Jarche got married to Elsie Gladys Jezzard, the daughter of Martha Finch and Walter Jezzard.

David had no core religious background in his early years, but soon joined the Anglican family in 1986 and was later confirmed in 2006. He had two brothers; John Suchet (a British TV host and one-time ITN newscaster), and Peter Suchet – father of TV broadcaster Richard Suchet.

David Suchet and his siblings –John and Peter – were all students of Grehan House School in Kent. Later on, David attended Wellington School. His love for acting made him register for the National Youth Theatre when he was 18 years. He had his training at the London Academy of Music and Dramatic Art.

David Suchet started as a stage actor in 1973 with the Royal Shakespeare Company, starring as Tybalt in the play Romeo and Juliet and later debuted in 1975

David’s first movie appearance was in a 1978 film titled “A Tale of Two Cities.” He has also played supporting roles in other films such as The Little Drummer Girl, A World Apart, Executive Decision, A Perfect Murder, and Sunday and several others.

While he is most renowned for his brilliant performance as Hercule Poirot, David Suchet has made other remarkable performances in roles like The Life of Freud, Blot on the Landscape, The Last Innocent Man and The Song for Europe.

David Suchet featured in Oleanna as John in 1993 at the Royal Court Theatre. He again starred in Who's Afraid of Virginia Woolf?'' and also played Salieri in Amadeus from 1998 to 2000. He was also seen again in The Last Confession which was dedicated to Pope John Paul I, where David played Cardinal Benelli. In 2014, David played Benelli in the play's Australian tour.

Since 2005, David has been taking the role of Lady Bracknell in Oscar Wilde's Importance of Being Earnest.

David Suchet has taken several other roles which give him global recognition for his brilliant acting skills. Trench coat in 1983, where he played a Greek inspector, 1984's Little Drummer Girl where he took the role of the terrorist from the Middle East, The Falcon and the snow Man where he was the Russian operative, Harry and the Hendersons, To Kill a Priest and Sabotage are just a few on the list.

He has also taken roles to portray some notable figures like Aaron in Moses, Freud in the movie Sigmund Freud, Louis in RKO 21, and Van Helsing in Dracula, to mention a few.

In 2002, David Suchet name made it to the Birthday Honors List of Queen Elizabeth II and was honored with Officer of the Order of the British Empire (OBE).

In 1999, his performance in "Amadeus" had him nominated for Best Actor in a Lawrence Olivier Theatre Award.

In 1997, his role in "Who's Afraid of Virginia Woolf?" made him a nominee for Best Actor in a Play

Again his performance in "Who's Afraid of Virginia Wolf?" won him Best Act at the London Critics Circle Theater Award.

2002 Tony Award-nominated him for Best Actor for his role as Antonio Salieri in "Amadeus."

In October 2000, David Suchet was honored with a Doctorate in Theatre

In 2008, David won the Best Actor at Emmy Award for his performance in Maxwell where he starred as Robert Maxwell.

In 2010, the University of Kent honored him with a Doctorate.

In 2014, his performance in Agatha Christie’s Poirot earned him a Lifetime Achievement Award at the 2013 edition of RTS Programme Award

Although David Suchet wasn’t raised with any religious beliefs, as he grew older he became a Christian and a member of the Church of England. In one of his interviews, David expresses love for his Christian religion and how his faith has helped him through life battles.

He was appointed as one of the Vice Presidents of British Bible Society in 2012. And in April 2014, David had fulfilled his long-lived dream to make an audio version of the New International Version Bible.

In 1972, David Suchet met Sheila Ferris (who later became his wife) at Belgrade Theatre, Coventry. David revealed that although he had a "love at first sight" experience with Sheila, it took like forever for her to accept his advances and go on a date with him.

On 30th June 1976, they eventually tied the knot. The union gave them two children: Robert in 1981 and Katharine in 1981. David’s hobbies include photography, acting, music, and traveling.