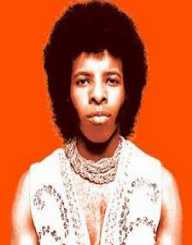 Sylvester Stewart was born 15th March 1943, to K.C. and Alpha Stewart. He was born in Denton, Texas, in the United States. Stone was one of five siblings, and the whole family sang gospel music as part of their church background.

The family moved to Vallejo in California shortly after Stone's birth.

As a youngster, Stone became proficient in several musical instruments. He performed in several bands during his high school years, most of which were short-lived.

Stone formed The Stewart Four with three of his siblings, and they performed regularly in their church. The four children changed their surname to Stone and became part of Sly & the Family Stone.

Sly Stone worked for radio station KSOL as a disc jockey during the 1960s. He was also a record producer for Autumn Records. He produced music for many of the local bands in San Francisco.

As a result of his talent, Stone played keyboard for many of the big performers of his era. The Righteous Brothers, Bobby Freeman, and Dionne Warwick were just the start of a long list of artists that Stone played for.

He also played at least one of Chubby Checker's Twist Party concerts during 1962 and 1963.

Stone took Sly Stone as his stage name. He then started The Stoners in the mid-1960s, followed by Sly and the Family Stone. They worked locally around San Francisco in 1967. Due to the band having a multicultural background, they drew plenty of attention.

Sly and the Family Stone, along with James Brown, were the trailblazers of the funk genre. Beginning in the late 1960s, they created a new sound. It has influenced many significant musicians since then.

The group released 12 albums up until 1982. In 2009, the Woodstock promoters released a compilation album that included their performance.

Relationships in the band began to fray as their success and fame grew. The Black Panther Party demanded changes to the style of music as well.

By 1969, Sly Stone and the other band members regularly took cocaine and PCP. The group became more interested in taking drugs and throwing parties than performing. Recording their music slowed down.

Despite the band's behavior, they had a massive hit with Thank You. In 1970, it hit the top of the Billboard Hot 100. It sold over one million copies.

Over the next four years, the band's popularity declined steadily. One of the members left in 1972 as he no longer got on with Stone.

Live gigs were getting harder to come by due to the heavy drug use of the band members. The band broke up in January 1975.

Sly Stone continued to record as a solo artist. He formed another group with the name of Sly & The Family Stone. Although he continued to release albums, he didn't reach the same heights of success he had previously known.

The police charged Stone for cocaine possession in 1983.

Over the next few years, he performed with artists like Bobby Womack, Jesse Johnson, and Earth, Wind, and Fire.

Sly and the Family Stone performed a tribute at the Grammy Awards in 2006. It was his first performance in almost twenty years.

Over the next ten years, Stone made many short appearances at different shows. On odd occasions, he didn't turn up at all.

Sly Stone appeared with several of the other band members at a convention in 2015. The convention was to honor the band and keep their memory alive.

The Rock and Roll Hall of Fame inducted Sly and the Family Stone in 1993.

In 1974, Sly Stone married Kathy Silva, an actress, and model. The couple had a son together, but they divorced in 1976.

Stone had a daughter from his later relationship with Cynthia Robinson. His third child, also a daughter, was born in 1982.