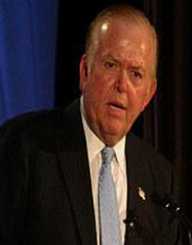 Louis Carl "Lou" Dobbs was born on the 24 September 1945 in Childress County, Texas in the United States to Lydia Mae and Frank Dobbs. When Dodds was 12 years old, his family relocated to Rupert, Idaho.

Lou Dodds graduated from Minico High School, Minidoka Country and then enrolled at Harvard University where he obtained a BA in economics (1967).

Lou Dodds started his journalistic career working as a police reporter for a radio station in Yuma, Arizona; he then worked as a local news reporter in Phoenix, Arizona. Relocating to Seattle, Washington State he was employed as the financial news reported with KING-TV.

Lou Dodds resigned from CNN in 1999 after disagreeing with management about the internet company Space.com but returned to CNN in 2001. He was the host of Moneyline which was renamed Lou Dobbs’ Moneyline in 2001, changing to Lou Dobbs Tonight in 2003.

In 2009, Dobbs issued a surprise announcement that he was leaving CNN and that CNN President Jon Klein had released him from his multimillion-dollar contract.

He moved to the Fox Business Network in 2010 and the Lou Dobbs Tonight show was launched in 2011. In October 2017, Dobbs interviewed President Donald Trump in a long-ranging interview which discussed fake news and tax reform. In 2018, he announced his support for Supreme Court nominee Brett Kavanaugh during an appearance on Tucker Carlson Tonight.

Radio shows he has appeared on including the Lou Dobbs Radio show which was broadcast on United Stations Radio Networks (2009-2012). The programme centered around political discussion, special guests and calls from listeners.

He also hosted the Lou Dobbs Minute on United Stations Radio Networks. In addition to his television and radio work, Dobbs is a columnist with various publications including the New York daily news and Money magazine.

CNN was asked by the Southern Poverty Law Center in July 2009 to fire Lou Dodds over that they saw as his racist conspiracy theories. This related to Dobbs’  reporting on issues relating to President Barak Obama’s birth certificate. Klein of CNN later said that the President's birth certificate issue was a non-issue and that he believed Dobbs would exercise good judgment.

Lou Dodds had strong opinions about illegal immigration and, in 2009, when shots were fired at his New Jersey home while he was outside with his wife, he tied the shooting to his stance on immigration.

Lou Dodds married Debi Segura in 1982. He was previously married to Kathy Wheeler (m.1969 - div. 1981). Segura and Dobbs have six children: Hilary, Jason, Chance, Michaelle, Heather, and Buffie. He is active on social media with over 1.84 million followers on Twitter.