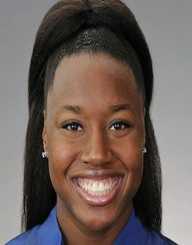 American swimmer Simone Manuel was born on the 2 August 1996 in Sugar Land, Texas into a family of three children. Her parents, Sharron and Marc, were both student-athletes. She has two older brothers, Ryan, and Chris who both played college basketball. As her family was sports oriented, Manuel started swimming lessons at a young age.

As a pre-teen, Simone Manuel was in First Colony Swim Team where Alison Beebe coached her. At Stanford University, she became a member of the women’s swimming team, Stanford Cardinal where she broke records in freestyle.

At the 2017 FINA World Championships, Manuel won gold in the 4x100m freestyle relay.  She also won gold in the 4x100m mixed medley relay. In a surprise win, Manuel beat Sweden’s Sjostrom in the 100m free by her 52.27 to Sjostrom's 52.31. In the 50m freestyle final, Manuel became the first American women to break the 24-second barrier (23.97), winning a bronze medal. The winner of the 50m freestyle was Sjostrom, with Ranomi Kromowidjojo of The Netherlands winning the silver medal.

As the 2017-2018 college season drew to a close, Simone Manuel announced that she was turning pro, although one year of NCAA eligibility at Stanford is still an option.