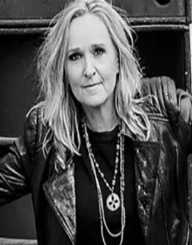 Melissa Etheridge was born on May 29, 1961, in Leavenworth, Kansas. She was the second of two girls born to John and Elizabeth Etheridge. John was a teacher at the high school, and Elizabeth was a computer consultant. Her affinity to music began at the young of eight.

Her first attraction was to the guitar.As a teenager, she always played at local bars with various country groups under the watchful eye of her father. She eventually left Leavenworth at age 18 to go to Berkley School of Music in Boston. She, however, dropped out after a year. She left Boston for Los Angeles to further her career and found bars that she played in.

Melissa met Karla Leopold at one of these bars whose husband was a manager in the music business. Karla convinced her husband, Bill to go to one of Etheridge’s performances. He was impressed and decided to become involved with her work. She also played in Lesbian bars, and eventually, Island Records Chris Blackwell discovered her and handed her a deal to write songs for Weeds a 1986 movie. The previous year, a lesbian record label, Olivia Records, had turned her down.

Melissa Etheridge released her debut album Melissa Etheridge in 1988, and the single, Bring Me Some Water was nominated for a Grammy in 1989 and became a double platinum record. She also released Brave and Crazy, her second album earlier that year. The album was number 22 on the charts doing as well as her first album. She began touring soon after and built a loyal fan base. She is a huge fan of Bruce Springsteen and sometimes plays some of his songs in her shows including crowd favorites like Born to Run and Thunder Road. She released a moderately successful third album in 1992, Never Enough. It ended up being a platinum record and was at number 21 on the Billboard chart.

Melissa Etheridge is a triple platinum multiple award-winning rock artist, guitarist, and singer-songwriter. She has gone on to release several albums. She has some favorites like ‘Yes I am’ which spent one hundred and thirty-four weeks on the chart and brought her into mainstream American entertainment.

In 1992, she established a scholarship in Leavenworth High school in honor of her father and his support for her.

After her struggle with cancer, she also became what is called a webpreneur. This came after her testimony that marijuana helped her alleviate the effects of cancer and chemotherapy. In 2014, she collaborated with a marijuana dispensary to make Cannabis infused wine, and they sold quickly. The wine now has expanded to Shiraz, Grenache and more recently a Cabernet.

Early in her career, rumors had started spilling about her sexuality. Melissa Etheridge neither confirmed nor denied these rumors not until January 1993. She came out publicly as a lesbian at a gay celebration of then-President Bill Clinton’s inauguration. She had a long-term relationship with Julie Cypher who gave birth to two children by a sperm donor David Crosby. In 2000, Julie began to reconsider her sexuality, and before the year was over, the couple separated. Two years later, Melissa started dating Actress Tammy Lynn Michaels. They had a commitment ceremony in 2003. Tammy Lynn had twins by an anonymous sperm donor.

By September 2010, Tammy Lynn and Melissa had split up. There was a custody battle that lasted two years, which was eventually sorted out in 2012

She finally started dating Linda Warren, and they got married on May 31, 2014.

October 2004 saw Melissa Etheridge diagnosed with Breast Cancer and she went through Chemotherapy. She lost all her hair due to this.

She took a break from music due to this. She returned with a performance at the 2005 Grammys despite her hair loss. Her performance so touched India Arie that she did the song ‘I Am Not My Hair’ in Melissa’s honor. It appears Melissa also has hearing problems. She was seen wearing hearing aids in 2016.

Since her coming out, Melissa Etheridge has become a prominent activist for gay rights. In 2008 as an act of civil disobedience, Melissa refused to pay state taxes because the state overturned their decision to allow same-sex marriage.

She is also an activist on environmental issues. She organizes the tour with ecological issues themes. In 2006, she toured U.S. and Canada with biodiesel. She has also organized a Standing Rock concert in 2017, in pursuance of the protest against the Dakota Access Pipeline.

The single, Bring Me Some Water in her debut Album Melissa Etheridge (1988) was nominated for a Grammy in 1989.

Melissa Etheridge garnered another Grammy nomination the same year for Brave and Crazy, which was released earlier that year.

Her third album in 1992 won her the Grammy for Best Rock Vocal performance for Ain’t It Heavy.

She also garnered a Grammy nomination for her cover of the Green wheel song, Breathe for the award for Best Rock Vocal Performance.

In 2007 she won an Academy Award for her contribution I Need To Wake Up, for the documentary An Inconvenient Truth.

Amongst other recognition for her work, she has also received a star on the Hollywood Walk of Fame in 2011.

Melissa Etheridge is a famous rock and guitar artist, entrepreneur, and activist. Her net worth is estimated at twenty-five million Dollars.