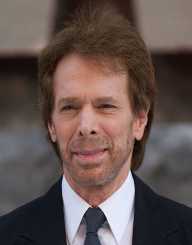 Jerry Bruckheimer’s parents were Jewish-German immigrants, and he was born on 21st September 1943. He was born in Detroit, Michigan and his family had to survive on low wages. His father worked as a salesman while his mother was into bookkeeping. After his high school years at Mumford High School, Jerry Bruckheimer was admitted to study Algebra and Psychology at the University of Arizona.

Jerry Bruckheimer worked with photography and cinema as a youngster, and he clinched some awards with his snapshots.

When he completed college, Jerry Bruckheimer worked on some commercials for agencies, but in the first part of the decade to 1980, he gave up his advertising industry job. Jerry set his sights on the movie industry and started off to pursue his dreams. Jerry Bruckheimer worked as an associate producer on the set of The Culpepper Cattle Company in 1972. After that, he also churned out “Farewell, My Lovely” in 1975 before rolling out March or Die in the year 1977.

When he worked on “American Gigolo” in 1979, Jerry raised a few eyebrows, and with Cat People in 1982, he was set in the eye of the public.

Jerry Bruckheimer hit critical acclaim with “Flashdance” as a co-producer in the year 1983. Building on the success of this hit, Jerry produced Top Gun, starring Tom Cruise in the year 1986 Jerry proved that he was set for an encore when he rolled out the 1990 hit “Days of Thunder,” followed by Eddie Murphy’s Beverly Hills Cop run. Working with Don Simpson, the other run of hits included Bad boys, Crimson Tide as well as Dangerous Minds. The Simpson-Bruckheimer Productions was born when he collaborated with his long-standing co-producer to ink a deal. They were signed on by Paramount Pictures, and his partner was a die-hard insider in Hollywood who knew to pull strings. Jerry had a fitting match since he was well-versed in the nitty-gritty of moviemaking.

After a five year run of their Paramount Pictures deal, in the fall of 1990, they hooked up with Disney by signing with its subsidiary, Hollywood Pictures for another five years. Jerry Bruckheimer ended his collaboration with Simpson in the year 1996 after his partner suffered health issues and critical heart failure. This gave rise to Jerry Bruckheimer Films, which debuted with the 1997 release of Con Air.

Jerry Bruckheimer switched to TV programs after going solo with his production outfit, and he debuted with Soldier of Fortune, which was not successful. Jerry did not waver as he came up in 2001 with CSI: Crime Scene Investigation. This series became a huge hit. Jerry Bruckheimer's Emmy Awards are winning “The Amazing Race” came along with “The Forgotten” and “Without a Trace,” later on. He also did “Take the Money & Run,” which had mild success.

The Pirates of the Caribbean trilogy and sequels started off in 2003, and Jerry Bruckheimer proved he was on winning grounds once again.

In the year 2006, Jerry Bruckheimer was number 42 on the list of Top 100 celebrities ranked by Forbes Magazine. He moved three places higher in the following year and peaked at number 39. Jerry Bruckheimer also got the Producer of the Year Award in 1998 from ShoWest. The Lifetime Achievement Award was given to him in the year 2000 by the Guild of Producers when he bagged the David O. Selznick Award.

Jerry Bruckheimer's streak of recognition continued in 2006 when the College of Fine Arts of his alma mater, University of Arizona awarded him a doctorate. Jerry Bruckheimer got a star at the Hollywood Walk of Fame in 2013 and was inducted at the Hollywood Boulevard. His films and productions have earned him several awards from MTV, 17 Emmys, 4 Golden Globes as well as People’s Choice Awards.

Jerry Bruckheimer averred over the years that he always sought to have people entertained. Taking a cue from his father, he says he preferred to do what he loved as his dad never got a chance to do that. Jerry attributes his string of successes to a fear of failure which has driven him to work harder and diligently. His movies are perfected on the score that he would love to see them and not just to win with the audience.

What Jerry's life’s calling is what he refers to as transporting audiences all the time from one place to another. His depictions are such that he wants to see make a difference in the life of someone each time.

The hallmark of Jerry Bruckheimer's handiwork so far can be reckoned to be the Pirates of the Caribbean, which grossed 3.7 billion in USD around the globe. This is not to forget the CSI series which also etched a place for him globally. The Amazing Race is another unstoppable work which signposts what has earned Jerry a place among the constellation of stars at the Hollywood Walk of Fame. Jerry Bruckheimer has fame and fortune as the evidence of his well-received works and these shows in his luxury of a home in LA, his Malibu ocean-front abode as well as homesteads in Santa Barbara and Bloomfield in the U.S. state of Kentucky. He also owns a collection of choice luxury automobiles.

Some of Jerry's favorite directors include Antoine Fuqua, Antoine Fuqua as well as Jon Turteltaub. In working with actors, he rolls in the midst of Steve Buscemi, Nicholas Cage, Johnny Depp and Denzel Washington.

Jerry Bruckheimer got married to Bonnie Bruckheimer before they separated. He married Linda later on and has a daughter and two sons.