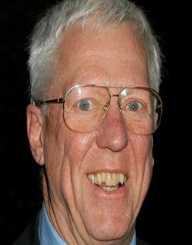 David Hartman became a household name in the television industry as the first host of ABC network’s morning program entitled Good Morning America for 12 years. His famous slogan for the show, "Make it a good day to day" has been deeply etched to the hearts of American people at his time as a host.

David Hartman married Maureen Downey who worked as a television producer during her time. The couple tied the knot in 1974, and their union brought forth four children together. She remained his wife for 23 years until her death in September 1997. He married a second time to a widowed homemaker named Mary Clark Putman wherein he had a single child with her.

David Downs Hartman was born on May 19, 1935, in Pawtucket, Rhode Island to German immigrant parents. Growing up, he was an active child who enjoyed singing and played musical instruments. He is an alumnus of Northfield Mount Hermon, which is previously known as Mount Hermon School, where he was a regular baseball player for the team. He was well on his way to becoming a professional baseball player with a sports scholarship offered to him but opted to pursue a degree in economics at Duke University.

At Duke University, he joined the business fraternity of Alpha Kappa Phi and also pursued acting at the same time. Upon graduating, he enlisted at the US Air Force where he served as a supply officer in the Strategic Air Command based in Bangor, Maine. While in the military, he was involved in the military production of Oklahoma! and took on the role of the character Curly. After finishing his service, he returned to the states to pursue an acting career.

Despite not having any journalistic background for the job, David Hartman turned heads and became one of the most familiar faces in American TV as the first male co-host of Good Morning America on November 3, 1975. During his 11-year tenure at the morning segment, GMA's ratings were at its highest, and he has conducted a number of reviews amounting to more than 12,000 as a host.

He ended his hosting career for the program in 1987 and continued pursuing other projects. After GMA, he became the anchor and host for a number of Discovery Channel discoveries and worked with WNET Producer James Nicoloro on his walk Through documentaries. These documentaries revolved around the topic of various communities around New York  City such as 42nd Street, Broadway, Harlem, Brooklyn, Greenwich Village, Central Park, and Newark to name a few. The series ran for nine years from 1998 until 2007.

Before his TV career, David Hartman originally started as an actor. He got his first break when he bagged the supporting role for the 1964 Broadway production of Hello, Dolly! followed by another entitled The Yearling a year after in 1965. He went to star on a number of roles, but his most memorable to date is his persona as a dedicated doctor in the series The Bold Ones: New Doctors and earned him a number of Golden Globe nominations.

The last of his acting stint involved him taking on the role of a retired baseball player-turned high school teacher on NBC's Lucas Tanner. The show ran from 1974 but got canceled a year later in 1975 due to poor ratings.