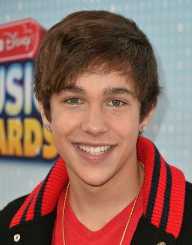 Some people term him as Justin Bieber in the making due to his unbelievable talent. However, young Austin Mahone prefers not being compared to avert any form of pressure. The young chap from nowhere took the music scene by surprise and has since won the hearts of many. Born on April 4, 1996, Austine Mahone is not just a singer but also a songwriter. For the likes of Young Money Entertainment, Cash Money Records and Republic to ask for his signature speaks a lot of volumes. Fame has however not eaten him up as he becomes one of the preferred teen pop stars now in the US.

Austin Mahone was born in San Antonio, Texas, the United States to Michael Lee and Charles Edgar Mahone. Sadly the young talent lost his father when he was just 18 months. Born of a German, English, French, and Slovak race, Mahone was single-handedly raised by his mother. He had part of his education at the Lady Bird Johnson High School but later dropped out to homeschool in his grandmother’s house.

As if he took a clue from Justine Bieber, Austin Mahone used YouTube, for as the platform for promoting himself. His first video was posted in 2010 and has since then followed it with several others. To further push his image as a good singer and gain more attention, he did a video cover of Justin Bieber’s Mistletoe and posted it in 2011. To further project himself, he singularly released his debut single, 11:11, to iTunes. He further up his efforts with the release of an Extended Play onto the Japanese music and later released his second single Say Somethin worldwide.

His talent was,however,discovered at this point in time by Chase/ Universal Republic Records and signed onto the label which Mahone announced on August 28, 2012. That was just the beginning as the talented singer was gaining recognition now. He was also signed to Lil Wayne’s Turkfit fashion clothing line as the new Teen Ambassador for the company. Mahone also did commercials for McDonald's and also Hot Nuts, based in Mexico. As a young artist seeking more mileage, he featured Flo Rida in his single Say You’re Just a Friend which was released on December 3, 2012,as a digital download.

More and more releases followed, including the piano rendition of Say You’re Just a Friend which he stated the reasons as "I knew my fans love the original version, but I saw a lot of comments saying that they couldn't really hear my voice, so I wanted to reassure them that I can sing the song. I thought it'd be cool to not only have the original version but also the piano version and change it up." In June 2013, Austin Mahone won MTV’s Artist to Watch at the MTV Video Music Awards for his song What About Love.

In 2013, Aquafina named Austin Mahone as the Digital and Brand Strategist for the flavoured sparkling water FlavorSplash. He did his first headlining tour MTV’s Artist to Watch Tour on October 17, 2013, and a month later released the song Banga Banga as the promotional single. He also released Mmm Yeah a single from The Secret Extended Play in 2014. Mahone’s second headline tour Austin Mahone: Live on Tour was also commenced on January 27, 2014.

Austin Mahone worked with another artist like Berky G for her music video for the song Lovin So Hard on May 6, 2015. In July that year, he released the single Dirty Work and later in November joined T.I, Pia Mia and others on Jason Derulo on his Australian tour. He has released tracks like Do it Right, On Your Way, Not Far, Put it on Me and later the mixtape This Is Not The Album. He became one of the faces of Macy’s American Idol campaign in May 2016. That year, he released two singles Send It featuring Rich Homie Quan and also Way Up. The Mixtape ForMe+You would later be released in December that year.

Austine Mahone dated Becky G for about five months in 2015.