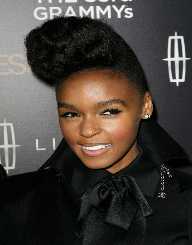 Even while in elementary School, Janelle Monáe was already showing a knack for creativity in both her singing and acting. She was a member of her Baptist church choir, and she often performed in school and community plays. Before going to high school, she had also started to write plays and musicals of her own.

As a teenager, Janelle Monáe studied at F. L. Schlagle High School. Her creativity continued to help her stand out there and even helped her to earn a scholarship to study at the American Musical and Dramatic Academy. After high school, she gladly took on the opportunity to study at this college, but she later dropped out of college before she could earn a degree.

After leaving college to pursue music, Janelle Monáe also had to work odd jobs to earn enough money to survive. While also working, Monáe released a demo CD called Janelle Monáe: The Audition. After making this CD, she toured college campuses and performance spots to sing live. It was at one of these performances that she was noticed by Big Boi. This rapper then invited Monáe to perform in a couple of his songs on the album Got Purp? Vol. II, which was released in 2005 and Idlewild in 2006.

After working with Big Boi for several years, Janelle Monáe went on to release an EP called Metropolis: Suite I with Bad Boy Records in 2007. However, it wasn’t until 2010 that Monáe released her first solo full-length album (The ArchAndroid). This album was a concept album telling the story of a robot woman living in a dystopian future, taking place over 700 years in the future.

Janelle Monáe went on to release her next album, The Electric Lady, in 2013. She also released an EP in this year for the iTunes Festival: London 2013. Her most recent release was also an EP called Wondaland Presents: The Eephus, released in 2015 with Wondaland Records (along with Epic and Sony).

Janelle Monáe’s acting career began only recently when she started taking on voice-acting roles in 2013. Her first voice acting role was in the adult animation show American Dad! She then went on to voice the character Dr. Monáe in the 2014 animated film Rio 2.

It was not until 2016 that Janelle Monáe began acting on the screen instead of behind an animated character. Her first non-animated film was Moonlight, in which she played Teresa. Her most famous role to date is that of Mary Jackson in the 2016 film Hidden Figures.

Monáe plans on continuing her acting career to the end of the 2010’s, and perhaps beyond. As of 2018, she is scheduled to act in the television show Philip K. Dick’s Electric Dreams and the film The Women of Marwen.

Over the course of her short career, Janelle Monáe has already racked up several prestigious award wins and nominations for both her acting and singing. Some of her most impressive awards are listed below.

Hollywood Film Award for Song of the Year (Rio 2)